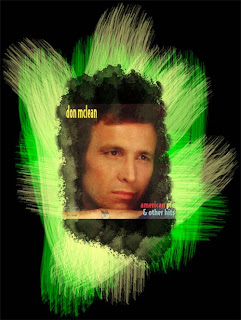 It’s been a long time since Don McLean was featured on the UC.
When it comes to this guy, two words often come to mind. “American Pie.”

However, beyond the 5 week number one hit, Don McLean has recorded many Irish traditional songs. I think that must have something to do with his last name.

To begin, the first Irish song I ever heard from Don McLean was “The Mountains of Mourne,” which was originally writing by Percy French on the back of a postcard, so one legend once said.

His version of this classic is not bad. It’s a little softer than I would have imagined it, but he carries a very comforting feeling with his voice.

Moving onward, this next one is a two song piece. The first is “No Irish Need Apply.” He does this one very lively, and there s something just unique about the accent he puts on for the song.


The second song in this bit is “Johnny McEldoo,” and I will say that Don McLean does the best version of this that I know. He opens it well, and carries the narration of the lyrics in a natural storytelling manner. His pacing might as well be perfect.

QATFYG:
Would you ever eat “Irish Pie?”
Holy Tripe!