The People of Afghanistan: www.Afghan-web.com 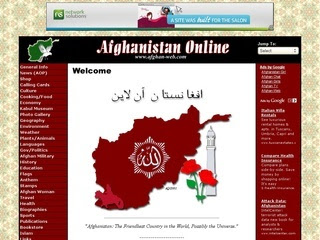 In the wake and dawn of September 12th, the world seems rather similar compared to yesterday. However, across the world in Afghanistan, the daily life is tattered, beaten up, beaten down, turmoil-filled, and under pressures on both sides of the lines.

The United States has soldiers abroad risking their lives every day because of what happened on September 11th.

But where is this all going for the people of Afghanistan?
The people in the slums of Kabul or in smaller towns that had no part in the mechanics of the Taliban government?

I first visited Afghan-Web.com in 2001, and like many, I had no real understanding of Afghanistan. If you’ll have a question regarding the life in Afghanistan, visit this website.

They cover everything from not only
Military and Government Issues to Culture and Cooking Recipes,
As well as History, Plant Life, even the native Dog Breeds of Afghanistan.
Moreover, it is a portal into many other online zones of the Afghan World.

A comment spreading across the internet once read “Why study Afghanistan? If someone bullies you, you don’t have to know their favorite movie.”

A more realistic statement is, “If someone bullies you, you don’t have to hate their entire family.”

This is website of Peace; however, it is not a straight-up “all pros and no cons” for Afghanistan, such as the notorious Afghan struggles with Women’s Rights.

QATFYG:
Will Afghanistan ever be anything more than what it is now?