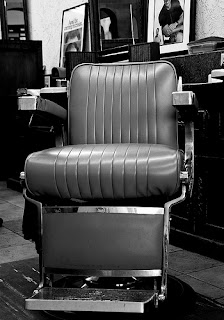 Snip, snip. The silver shears sliced through the long ropes of brown hair. Snip snip snip. The dark current unraveled from across his eyes. Charles Switch watched the people on the street as they passed by the large window of Franken Brothers Barbershop. He looked down and saw the noon sun trace the tufts of hair as they fell to the pale speckled floor. An old radio in the corner wept out “Midnight Love in the Summer” by Richard Blair. Marty Franken, as he introduced himself, stood and nodded. Diving back into his work, he started making small talk. “I'm really glad you're ditching this gawd awful lanky ‘do.” A thick accent gelled over his words. “It just isn't right, my hair was never like this.” His voice rippled with concern. Marty Franken replied with a grunt and continued cutting at his long drab hair. The low whir of the barber pole could be heard outside. Inside, the shop was empty, just the two men casually chatting. Never would I let my hair get this long. He’d never believe me if I said so, he’d just think I’m making excuses. “Yah know son, you really should have come earlier. Why someone would want to look like the wolfman outside of Halloween, well I'm sure you've got the answer.” “...No.” Charles replied solidly. “What do you mean, no? You mean to tell me you just woke up and zing! Come on, don't be shy!” Marty smiled at him in the mirror. “Sir...” He cut in “Please! Marty!” Charles cleared his throat and proceeded. “Right, Marty. I don't have an answer. Today hasn't exactly been easy to understand.” Marty grabbed at his face and moved it to one side. “Well kid! Whatever you're using sure does work!” His portly build shook with laughter in the reflection. “Say, mind telling me exactly what it was you used? I'm sure I could sell a dozen bottles down here.” Marty leaned in with fervent anticipation. Apparently business isn't booming for Marty.