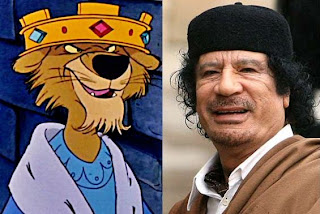 So it looks like Momo Gaddafi is no more.
Now US President Barack Obama is receiving praise for participating in the events leading to the death of the former Libyan leader.

The Right Wing and the critics of the president place Obama under fire for almost every single thing he does...such as low numbers in job creation, limiting resource development, poor handling of the US economy, and the situations in Afghanistan...but some of them are now even raising glasses in his honor. No joke: it was on Fox News.

He even received praise when he assassinated Al Awlaki, the Arab American in Yemen.

And most notoriously when he took out Osama Bin LazyBones.

Obama apparently is only good at killing Arabs.