Not just music for the subway! 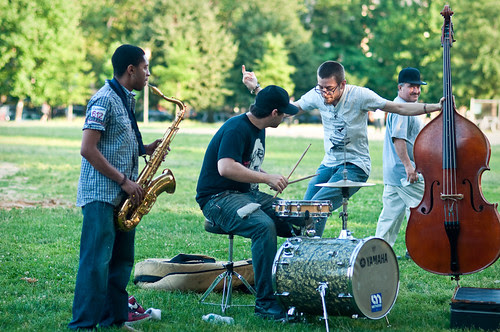 I encounter this band a lot on the subway. Now platform musicians run the gamut from "annoying" to "want to kill" to "intriguing" and I can safely say that Sistine Criminals are in the latter category. They have kind of a ska/jazz/classical sound which is fairly unique anymore!
I began seeing these guys enough time that my old idea of interviewing subway musicians (something that's been interesting to me since I got here) finally gave way and I hit these guys up for an interview about where they came from, what drives them and their hopes for the impending future (yet the future is always impending).
What's your backstory?

GREGORY:  In 2004, Me and Aaron met in Boston on Newbury St while he was busking. I was just a Berklee student passing by but I was drawn to his sound so I waited til he had a second to exchange contact info. At the time I was studying to become a jazz drummer while at Berklee College of Music and my favorite musician was John Coltrane and for me, Aaron had THAT sound I was looking for in a Sax player.
About a year later in 2005, we formed our group Sistine Criminals with our original line-up which focused on the genre of DnB. We began by mixing Jazz standards and DnB with some original music written by Aaron... This was the beginning of Sistine Criminals' musical evolution.
What influences your sound?
GREGORY:  To Start... We all have backgrounds in Jazz and Classical but our sound as a band has been influenced by virtually every kind of music with emphasis on Electronic genres.
What is it like to play on subways?
GREGORY:  Playing the subways is hard work. It starts with lugging our equipment from the rehearsal space, down staircases...UP staircases...
Sometimes asking anyone around for help in carrying equipment... of course getting on subway cars; many times inconveniencing other passengers by taking up too much space... It ends up being a good work out... and then we play between 2-4 hours... sometimes up to 6 or 8 hours...
As a duo, what Aaron and I end up doing many times is experimenting with rhythms, beats, sounds, textures, at varying tempos and feels; whatever we can do to successfully emulate our favorite electronic music acoustically... and of course getting people to jam out or dance to our music. Everyday is different... There are days when we feel very enthusiastic and people can sense that energy and many times that's when we get a good response from the crowds and make the most money...
Why did you pick subways?
GREGORY:  We would rather play outdoors honestly... But we decided to play the subways more because we don't get shut down by the cops as much... tend to make more money in the subways also.
(popo shut us down)
Where else are big venues for you?
GREGORY:  The Sistine Criminals as a full band have played countless underground events and have been playing a number a festivals within the last 3 years. Some of the above ground venues that we've played include, Le Poisson Rouge, Mercury Lounge, Parkside Lounge, and Sullivan Hall to name a few.
What's your ultimate goal, with Sistine Criminals?
GREGORY:  Recording more music... playing more shows...  supporting ourselves through our music.