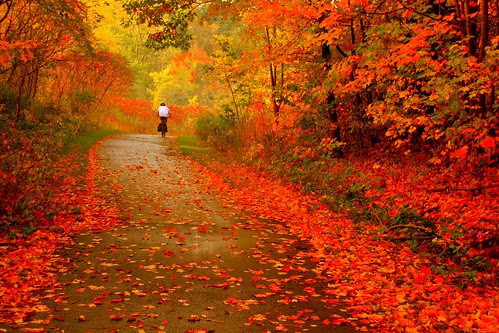 So Olenka and the Autumn Lovers hail from London, Ontario, which is just a hop across the great diseased Lake Erie. I talked to Olenka (who is ORIGINALLY from Poland) via the phone last Saturday in my first Useless Critic phone interview. :O
Who they are:  a popular Canadian indie folk band, growing an international buzz little by little. Olenka Krakus is the singer-songwriter at the head of the band, joined by Sara Froese, Simon Larochette, Kelly Wallruff, Evan Brodie and Jeff Moon.  They use a diverse range of instruments, such as my favorite, the cello.
SEE HERE


They are a very autumn-sounding band methinks. And they just came off a lottttt of touring (they also have two albums out- the last one And Now We Sing was released in 2010) which won't stop any time this October. But then, as Olenka said, a much-deserved (needed) break.


The band won't be coming to America any time in the near future, sad to say.


"It's expensive," Olenka said, bringing up the idea of the always-popular CMJ Fest, which is held in October in NYC. Ah, not so much. Olenka brought to mind the fact that for a non-American musician to tour the U.S. (something I did not realize beforehand, mind you) a visa is required. Those can be THOUSANDS. And for a show you will only be paid a few hundred for, if at all? ?!?!?!?! well, it's a shame that's keeping them out of our country.


(unless she wanted to come illegally....which she'd never do....wink, wink)


However, Olenka and the Autumn Lovers have big plans this autumn, anyway, in our neighbor to the north.


The Halifax Pop Explosion (which sounds as powerful as IT IS)- also featuring the Pains of Being Pure At Heart and Twin Shadow- will be at various places throughout grand Halifax this coming October 18 - 22. So! If you are Canadian, eh?


It's a lot like CMJ (lots of random shows, venues, etc).


It's not their first time there, apparently. One thing Olenka taught me was that October is prime time for musical festival season, which is something I never really factored in before.


"The weather is decent, as it's really hot here in the summer and then cold in the winter. We tried to tour heavily in the winter once...that was a mistake. We had a few of those moments in snowstorms," she said, addressing why the fall is such an opportune season for touring. No blistering heat; no life-threatening blizzards.

In between non-stop touring for the band (a break is coming, much needed, apparently!) Olenka writes. and she writes. a lot. and fast.


"People are typically surprised," she said about this. "I just sit there on the guitar and write them. It comes natural."


"If I take a while to write something, it feels forced. But you have to do it," Olenka said, one piece of advice she stressed to any writers out there. To actually sit down and complete the task you've set yourself up for (and believe me, she's right). Even if it ends up being terrible.


She's currently writing away for their newest project. Other items of recent note for the unique group- one that could easily be found in Brooklyn, so is their aesthetic- is a contribution to a Gordon Lightfoot tribute album. "Rainy Day People." A song called "Maggie Howe" was contributed to another compilation of Canadian folk music called  Folk Songs Of Canada Now. THAT can be downloaded for free.


Now, I was curious. Was the fact Olenka originally has her roots from the old world flavor of Poland something that has significantly colored her world outlook, especially artistically?


"I left when I was five," she explained. "But it's something I often play with in songs, the whole idea of another world there. I've been back to visit several times."

We talked about how the perspectives of old world Europe can often clash with North America as "they've actually lived through these experiences and with that there's some melancholy that, I think, is present in my music." As in Europe has faced wars and oppressive regimes and us North Americans, on the world scene, well, we're still rather green.


And that has a very real, very visual presence in her music as well.


Check out Olenka and the Autumn Lovers if you haven't already. Soon, I think, they will have the buzz around them that will enable a tour to the U.S. as well as other places. :)