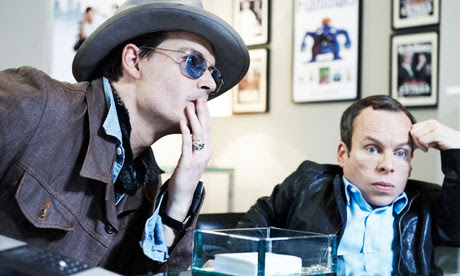 The second episode of Life’s Too Short, with Johnny Depp, somehow manages to be funnier, more awkward and vulgar than the first episode with Liam Neeson. It’s a testament to Ricky Gervais and Stephen Merchant’s amazing writing and their ability to make anything funny. Even full blown AIDS.

This time, Warwick Davis finds himself at a science fiction convention debating with a mother about tumours, having an unconventional interview and acting as a muse for Johnny Depp! Though he does make a guest appearance at a wedding at the end of the episode, I want to concentrate on Davis’ interactions with Gervais and Merchant and the star and also the convention.
At the sci-fi convention, Davis has an area where he is selling mugs, mouse mats etc. with his face on them. By far the biggest seller (though that isn’t saying much) is signed photos of himself for £25. The problem here starts when a mother and her son get to the front of the queue. She tells Davis that her son has a tumour but he’s also a big fan. Davis signs a photo and goes to charge her the £25. She seems offended by this and asks if he’s still going to charge her even though her son has a tumour. Davis says yes, because it would be unfair on people who don’t have a tumour and that he doesn’t know for certain that her son has a tumour. This leads to the following exchange:

Mother: Let’s assume that he’s got a tumour, because he has, and then if it turns he hasn’t you can go mental and I’ll send you £25. How’s that? Everyone’s happy.
Davis: No ‘cos I’m not happy am I? I’m down £25. You’re the only one that’s happy.
Mother: Yeah but I’m not happy because he has got a tumour.
Davis: Yeah but you’re no less happy than you were when you started. You came over here with the old tumour, you’re not walking away with more tumour…

It’s an incredibly funny scene and very awkward to see Davis arguing with a woman about her son’s tumour while the son is standing there. However, I have to say I agree with Davis on this one (remember though that he is playing a fictionalized version of himself!) in that they shouldn’t get a free photo just because of an illness. That sounds harsh but it’s the kind of thing that Gervais and Merchant address in their other works, the idea that people expect the world to give them things because they’re ill or lazy or whatever. In the end, Davis gives her a free photo because she says that word might get out that he’s a nice guy for giving out free photos to kids with tumours.
Another awkward but funny scene happens at the convention with a reporter for a local news channel. The reporter doesn’t like his job and also might possibly have Tourette’s syndrome, the way he goes on. At first, he makes a lot of mistakes introducing Davis which he gets annoyed with himself about. When Davis finally gets to speak, he mentions that one of the films he was in starred a young Jennifer Aniston, which interests the reporter. He asks if anything interesting ever happened with her to which Davis replies that it didn’t.
Reporter: Fuck’s sake, cut. What are you doing? Don’t set me up with something like Jennifer Aniston and then have nothing because we both look like prats.
All the while, the reporter never raises his voice (until the end of the scene) which makes this even funnier than it would be if he was shouting!
The final straw comes when Davis disagrees with him about a film he wasn’t in.

I absolutely was not expecting it and this is one of the (many) points at which I had to pause the show from laughing so hard!
On to the big star content of the show. As mentioned, it’s Johnny Depp. Now, the scene between him and Gervais (with Merchant and Davis also in the room) has been floating around the internet for a few weeks now, and I’ve watched it a couple of times and laughed each time. Watching it again in the context of the show was no different. I laughed again!
Davis’ first encounter with Depp is when he is employed as a muse for his method acting. Depp is going to play Rumplestiltzkin in a new version of Rapunzel and would like to work with a dwarf to get into their mind and be able to act more like one. This involves watching Davis go about simple things like getting on a chair, walking and pretending he’s been hit by lightning and falling down.  Depp also asks him to river ance (a very fast Irish dance based mostly on movement of the feet), which results in one of the weirdest things I think I’ve ever seen on TV. Depp is playing an Irish style tune on a flute while Davis river dances.
The best bit is that Depp wants him to dance faster and ends up shouting things like “Fucking give me passion!” while Davis gets more and more out of breath! It’s really weird but still nonetheless funny.
The best part of this part of the show is the following bit of scene:

Depp: At one point Rumplestiltzkin climbs up through the sewers to escape the villagers.
Davis: OK.
Depp: You get what I mean?
Davis: Yeah. How do you want to do that then?

The camera cuts to Johnny Depp in the bathroom and pans to Davis stood in his toilet. This is another point where I had to pause the show for laughing. I was not expecting it at all!
Depp seems interested when Davis mentions that he likes to pop and see Gervais and Merchant every now and then, especially so in Gervais and asks if he can go with Davis to his next meeting. Of course Davis agrees as it will make him look good!
When Depp arrives with Davis, he immediately taps his cigar ash into Gervais’ water glass. We can tell straight away that something’s wrong and this meeting isn’t going to go how Davis planned it. Gervais and Depp enter into a kind of penis waving contest about their work:

Gervais: Hi. How’s it going?
Depp: I’m fine man. Just doing another film that’s gonna make loads of money. Probably a lot more money than any film you’ve ever made.
Gervais: Good
.Depp: And you?
Gervais: Yeah. Just writing and… I write and direct all my own stuff.
Depp: How great for you. That must be so great.

There’s a lot of tension in this scene but it’s still funny. I like the idea of one of the richest, most handsome, most famous men in the world being offended and trying to one up and brag to Gervais who, although famous in his own right, is nowhere near as famous as Johnny Depp.
My favourite line in the whole episode comes next and the jokes that follow are a brilliant piece of self-deprecation on the part of Gervais:

Depp: I want you to know this and I want you to carry this with you for the rest of your days. No one makes fun of Tim Allen on my watch and gets with it. Don’t say anything. Just keep that in you, OK?

I haven’t seen outtakes yet but I’m assuming that both Gervais and Depp laughed many, many times. It’s the seriousness in both of their faces, having to hold eye contact and the line that would make that hard to do.

Then we get to hear some of the jokes that Depp and his pals came up with after the awards and some of them are actually quite good:

Depp: Why did Ricky Gervais do a series of audiobooks? So that the blind could hate him as well.
Depp: Now this is from Angelina. Tell Ricky Gervais that me and Brad have a picture of him on our mantelpiece. Because it keeps the kids away from the fire.

His final one prompts Gervais to respond with one of his own, which upsets Depp again!

Depp: I hear Ricky Gervais quit Twitter recently because it only has 140 characters. Well that’s 139 more characters than he’s ever come up with.
Gervais:  Good joke. I mean, the telling of it took about as long as Pirates of the Caribbean 3.

Everyone except Depp laughs at this and it upsets him. He starts weeping and then storms out of the office, though not before kicking a bin and overturning a fruit bowl! It’s such a good scene.

As I said at the beginning, this episode was funnier than the previous which is impressive, considering how good Liam Neeson was. The show is already set to be a big hitter and I imagine it’s going to win a lot of awards!
- Daryl Cox