November 22, 2011
I am not really a fan of the gentleman, but during an interview with him, and during, no less, a question regarding his being in last place according to the latest polling data, CNN displayed this graphic: 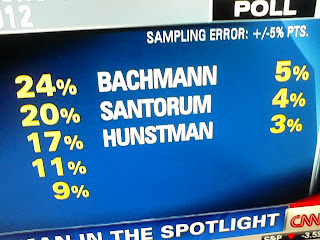 Are they adding insult to injury, or just furthering the theme of the media trivializing those they consider to be fringe candidates? Je renonce, you decide.
In regard to tonight's debate, another foreign yawn policy one, this time labeled "national security," Mr. Hunstman (sic) was actually one of few who brought rare points of clarity.
Key points:
1) Romney wants to rely on generals on the ground to set Afghanistan policy; wasn't that the U.S.'s folly in Vietnam?
2) The real threat is our economic crisis.
That being said, Ron Paul 2012.