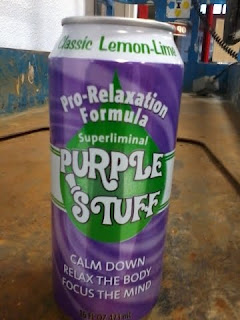 When I first saw a poster for "Purple Stuff," I had to tweet about it. Secondarily, I had to text my friends that make racist jokes -(in excellent taste)- so they could have a decent laugh.

I confess that "Purple Stuff" is a name that grabs the attention, so I commend the marketing designers, and the colors stand out over other cans on the energy drink shelves. However, how does this product compare in terms of taste and quality?

Well, I have only myself to blame for ignoring the obvious and purchasing something called "Superliminal." It had a silly name, and I am a silly goose of a human being. The problem was that I assumed that every product bearing the name "Purple Stuff" would actually be purple, regardless of lemon or lime flavor...after all Pepsi had Pepsi Blue and Crystal.

This was not purple at all.

The taste was not exciting. It did not have the stark bites of certain drinks such as "Full Throttle" in the past. Even "Red Bull" has a certain distinct flavor that is able to grab the attention of the consumer, for better or for worse. Carbonation was not overpowering, which I liked, but it lacked enough flavor and strength for total satisfaction.

In the end this was just rather dull.
On the shelf next to all other energy drinks, this one actually boasts the abilities of "calming" effects instead of serving as a hyperactive enhancer. Overall, it had about as strong of a reaction as a can of sprite. In other words "dull."

Will I buy this product again?
Probably.
Why?
Because it is amusing. :P :P
It's a shallow world.

QATFYG:
How often do you drink purple Kool-Aid?