December 25, 2011
Gather around children, to hear a story as old as time
and Joan Rivers

THE USELESS CRITIC
NON-EXISTENT
RADIO THEATER
I MEAN THINK LIKE THE SHADOW SHIT
SERIOUSLY
THAT'S WHAT THIS IS
DRAMATIC ORGANS
AND STUFF
PRESENTS A CHRISTMAS TELEPLAY
FOR 2011
A.D.
OR C.E.
IF YOU DO THAT PC SHIT
I DON'T
THE KRAMPUS MEETS THE KARDASHIANS 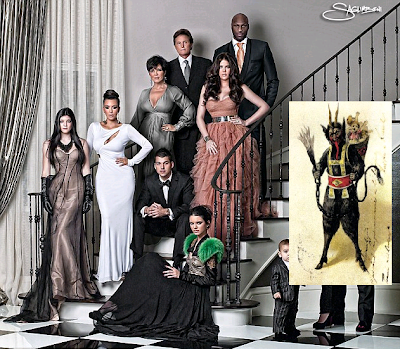 I want to preface by saying I know virtually nothing about this family. All I know comes from gossip blogs and People magazine and Cara's mouth. ha, Cara's mouth. lololol so bear with me.
It is Christmas Eve on the Bravo channel. Trashy television fills the air. In a mansion, similar to that one above picturedm, the Kardashians and their cohorts are sipping expensive alcohols and sitting around a fire and a gigantic, godlike fiberoptic tree.
KRIS JENNER/MOM:  Does anyone want to eat a Christmas bird? A gamelike specimen?
KHLOE:   I want a baby, but my ovaries are full of jello.
HER BASKETBALL PLAYER HUSBAND:  Just your ovaries? Your whole vag is where pudding goes to die.
KHLOE:  Well your penis ISN'T MUCH BETTER.
KRIS JENNER:  I'm going to drink Christmas dinner. What do I have left to lose? I haven't had a real layer of skin on my body since 1996.
KIM:  Why didn't my butt get its own stocking this year?
THE OTHER KARDASHIAN/KOURTNEY:  We have this discussion every Christmas! I'm sick of it! If your butt gets a stocking my face should get one TOO.
KIM:  I'm not the one that broke up the NBA!
KOURTNEY:  That's not possible! YOU CAN'T BREAK UP THE NBA!
Yoko Ono appears in a lit-up mist.
YOKO ONO:  OH YES IT IS
EXIT YOKO ONO
ROB KARDASHIAN:  I get the feeling whoever is writing this knows nothing about us other than what she just read on Wikipedia.
KIM:  I fucking hate those SAVE WIKIPEDIA advertisements. I mean srsly we're not all made of money.
KHLOE:  Srsly.
We notice at this point that there are 1000 dollar bills hanging like ornaments from the tree.
SFX:  OMINOUS DOOR KNOCKING
ORGAN MUSIC
KRIS JENNER:  Hark! Who knocks at my door?
KOURTNEY:  Should I answer it?
KRIS JENNER:  NO HAVE FELLATIO WITH IT ANSWER THE DOOR
She goes innocently to answer, gathering a scarf around her neck that glitters in the transcendant Christmas light.
At the door, stands noneother than Santa's evil companion, the Eastern European Christmas demon KRAMPUS. He is horrifying to look upon.
KRAMPUS:  J3EROIJEWLKAJ.REJRLKERJOIARJEOIJRA
He then bites off Kourtney's head, as if she was a chocolate Easter Bunny.
KIM:  Ugh who invited Russell Brand? Isn't he Jewish or something?
KHLOE: How can you just stand there? That thing just killed our sister!
KIM:  A Very Kardashian Funeral...there is potential in this.
KRAMPUS:  EJRKJARKLEJRKJERLKJLKRJEKLARJEKREJREKA
He drinks a Slim fast and walks inside. He smells of oysters and other hideous, hideous things.
KRIS JENNER: I guess we need to clean the carpet. Scott, go get the stain remover.
SCOTT:  I just want to stand here and look at myself.
KRIS JENNER: That works, too.
Kris Jenner goes to clean the blood stains off the carpet. Blood stains fast so it's imperative they act or buy another carpet made of the fur of rare albino alpacas.
Meanwhile, Khloe approaches the Krampus and stands face-to-face with the being.
KHLOE:  Are you some kind of ghost of Christmas Past?
KRAMPUS:  KEJRLKAJELKJRLKAJERLKAJERKEA
KHLOE:  I DON'T SPEAK SPANISH
KRAMPUS:  ejrlkajerkajeklrjeakjre. EREKAKREA? ernjeklar. ejreajrke, jerjeakrjekrejarke.
KHLOE:  I don't have time for this.
KRIS JENNER:  I NEED MORE BLEACH
There is another ominous knock at the door. CUE DRAMATIC ORGAN MUSIC.
ROB:  I guess I have to answer that. It's the natural order of things for me to go first.
At the door, stands Tim Tebow, the hyped-up football player with a penchant for all things gloriously religious.
TIM TEBOW:  Do you guys realize you have the Christmas devil in your house? I'm here to pray him out of here.
ROB:  You just lost to the Buffalo Bills. The Buffalo Bills. The author would like to interject here that no one loses to the Bills ever. God obviously has abandoned you.
TIM TEBOW:  Krampus? I'm here to exorcise you, o demon!
The Krampus reacts rather nonchalantly to this. He stares at Tim Tebow, before devouring him.
Later, when the Christmas dinner is finally upon the household, the Krampus is seen splitting up the green bean casserole and serving it to his new reality show companions.
Except Scott. Because I don't even like Scott.
HAPPY KWANZAA FRIENDS
LOVE, THE USELESS CRITIC