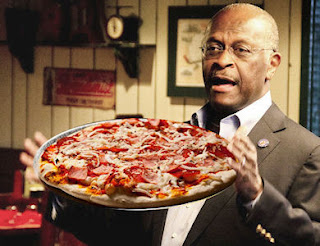 I've written several posts about Herman Cain on The UC, such as encouraging people to read the plans on his website and posting a book review of that thing I skim read in Barnes and Noble one Saturday. However, I promise this will be the last post I ever write on Herman Cain (unless by some miracle he becomes president). Anyway, victory does not appear to be on the horizon for the Cain Train. A prime example is Herman Cain announced today that he is undergoing a major campaign reevaluation, and the manner in which this news was delivered hints that it might be a reevaluation headed toward withdrawal.

Cain has been on one of the strangest rides of any candidate. He was not a politician. Instead, he was a self-labeled "problem solver," but he was also the host of a talk radio show focused on politics. He was the one talk jock that actually took a stab at running for president this time around (no sight of Rush Limbaugh, not that that would ever happen for many reasons). I first noticed Herman Cain because of his strong debate performances. People have to be honest; in the early debates, he had the best responses and generated the best reactions from the crowd. This brought two things: the top of the polls and media scrutiny.

As he grew to frontrunner status, the media kept downplaying him, and from the start of his success, they threw out the ideas: "He won't win." "He can't win." "It's going to be Mitt Romney." Those were said so much, it was almost like a sabotage act. He is a person that was faced with at least 6 accusations of sexual misconduct or explicit behavior, yet I doubt that had any scarring on his campaign. Poor debate performances under the pressure of a frontrunner attention are more likely the cause of his dwindling poll numbers. The 999 Plan was rejected by so many on both sides. During the foreign policy debate, he embarrassed himself, and his answers were often variations of "It's not clear," and "I don't know yet."

Anyway, it looks like this man won't be our next president, which sucks for SNL and Jon Stewart. As for me, this is the last time I'll ever mention Herman Cain on The UC. Fellow Contribs of course have their doors wide open. However, you better buy your Herman Cain Merchandise fast before it goes out of style. (See Below).

QATFYG:
Would you buy this? 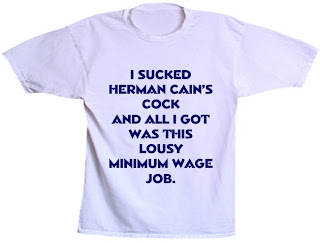