Kurt ruminates on a sexy guy, Borders, and the black hole that is Erie, PA. 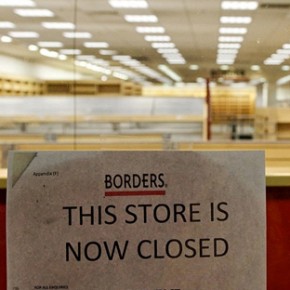 A few weeks ago, I was in Erie for a visit. As my hometown, there is a certain kind of nostalgia associated with it. After all, it's where I made friends, partied, went to school--elementary through college--and worked at the local Borders bookstore from 1999 to 2006. Not an insignificant stretch of time when I look back on it. It's too bad Borders screwed the proverbial pooch and went bankrupt, because I always preferred to shop there. Now the sole remaining major bookstore chain in this area, Barnes & Noble, gets all my book (and occasional cd or dvd) purchases. Aside from Amazon. Did you know about their Lightning Deals? Fucking insane.

Where was I? Oh yes, B&N. I was at the Erie store during my visit, and then I saw him: my old Borders store crush. When you work at a retail chain for some seven years, you come to recognize the regulars, the ones that frequent, say, a local bookstore chain. Through the course of my retail life, I was obsessed with this guy, whose name was Patrick, I'd discover. He made my heart go all a-quiver. Dirty blond hair, nice eyes, a pronounced nose (I'm a sucker for angular features), with an alternative style, the kind of style all those hipster kids co-opted.

Of course I didn't talk to him, aside from the cursory "Hello there." I couldn't talk to him, because he made me crazy. I was in my early twenties, coming into my own as a gay man, and had no idea of how to talk to anyone remotely attractive. He was pretty quiet, too. It made him mysterious. And sometimes he'd come into the store with this girl who might have been his girlfriend, but I doubt it. She was short, fat, and everything about her screamed "fruit fly."

So imagine my surprise when Patrick is at B&N at the same time as me. Random, but honestly, I think the universe has a way of messing with me, because he looked good. Like he hadn't aged a day. And I know what you're thinking because I know you all too well by now. You're thinking "Oh, so it's one of those kind of articles. You totally talk to him and either you hit it off or you make an ass out of yourself." I'm happy to say that neither of those things happened. I didn't talk to him. I didn't have a reason. Actually, I did have a reason.

It made me realize, he's still living in Erie. He, like so many others, fell into the pit of despair that is Erie, PA. He was comfortable, and hey, Erie has like, a local art scene and stuff, and if we don't try to make things happen here, who will?

Not me, that's who. So many of my friends from high school, and even college, just resign themselves to Erie county because it's easy, I think. I mean, wow, we have a mall and everything. Or maybe they don't think it's easy, maybe they're scared of leaving? Like jumping off a diving board or strapping yourself into a rollercoaster; there is that moment of "No, I'd be much safer here, where I know what everything is. No surprises for me."

Well, I do not want safety, I don't want to stay on the diving board. I want to cannonball into the chlorinated water. I want to scream and feel the adrenaline rush as I crest the first big drop. I don't want to be the person that settles, that needs to be defined by someone. I refuse to be someone's crutch.

So, what am I doing with my life? I could say that I left Erie to get away from all the pointless drama and clingy bitches that plagued me. But, let's be honest, I traded Erie for Hollidaysburg, and that's like trading a dollar bill for four quarters. Plus, as much as I refuse it, I am a crutch. I am constantly defined by other people.

So, can we really, honestly escape the orbit of our sad hometowns? Or am I just like Patrick, resigning himself to be a small, sexy fish in an even smaller, zebra muscle-infested pond? (hey there, Lake Erie!)