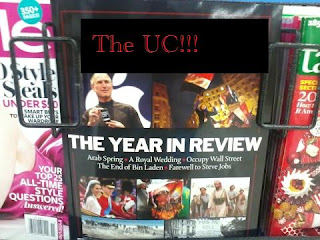 This has been one strange year. In fact in many ways it has been a roller coaster of year. All that means is that there have been many highs of 2011, and there have also been many many lows where things just fall down to a deep unsatisfying level, and you wait with strong anticipation for the highs to return.

This is now New Year's Eve, and it is time for reflection on the last 12 months, and one can only wonder what 2012 will hold.

1. Arab Uprisings: Most Famously Egypt, Tunisia, and of course Libya.
2. Ron Paul Supporters Dominate the Internet
3. The great Steve Jobs passed away.
4. Steve Jobs' postmortem Bio Book is a major hit.
5. Selena Gomez and Leighton Meester did a movie together.
6. Congress fell to a 9% approval rating.
7. Hannah Montana had a lousy finale.
8. Wendy's has a new cheesy cheddar burger.
9. Charlie Sheen charmed audiences with his one man show.
10.Casey Anthony murdered her daughter (or did she?)
11. Nancy Grace became the cheapest bitch on Earth.
12. Demi Lovato came out of rehab...but not for drugs (wtf?)
13. Amy Winehouse went to...not finishing that sentence.
14. Presidential debates became the best reality show on TV.
15. Herman Cain was caught harassing *Your Name Here _________.*
16. News Anchors keeps getting hotter and hotter.
17. Bin Laden died.
18. Time Magazine made their person of the year the protestor....how lame is that?

QATFYG:
What is your New Year's Resolution?

Who cares? The World is going to end in 2012, so make this next year fu*king count!