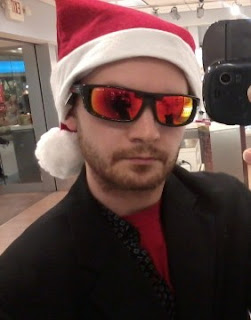 For awhile I felt kinda' bad about it, but then, this man named Anderson Cooper (he’s kind of like Santa except without a beard and healthy eating habits) told me that it was okay to be myself as long as I didn’t hurt anyone or vote republican. I’m not from a Blue State background, but I can tell that Anderson Cooper knows what’s best for Americans like me and for homophobes.

Moving onward to what I would like for Christmas, I recently was informed that Google was donating $11 million to help stop human slave trafficking, but does human trafficking apply to Santa Claus? I would just love a hot woman from Barbados like Rihanna that I could turn into a cash cow…well, cow implies overweight…so more like a cash meow. I'm serious about that Santa, no cows. Fat slave is an oxymoron. However, if it turns out you're someone that likes to tick people off and actually put a fat Barbadian Slave Woman under my Christmas Tree, she can sing gospel with an accent, and I'll still get rich off her circusesque abilities.

Aside from slaves, I suppose there are a few material objects that would do nicely. I always wanted to become an expert pianist like Franz Liszt or Jerry Lee Lewis or Lady Gaga before she dropped the keys for just a mic and all those uncomfortable outfits. I’m thinking grand ivories. If you have to kill an elephant, do it.

So as you might know Santa, the Republicans are looking for a new nominee for president. I tell you, it’s one heated race, but another thing I will add on my list is to find a president for that will actually make a difference for the American people…or at least you could give Ron Paul some more decent fu*king media coverage.

Lastly,
QATFYG:
If I’m considered naughty this year, what the hell are you going to do with Casey Anthony?
Do you love or hate Michael Moore?
What was Baby Lisa planned to get for Christmas?

Respectfully Yours (but not for sex),