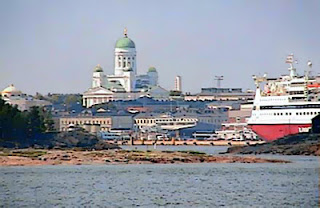 I want to go here.
Finnish music isn't really my bag because a lot of the time they don't even bother singing in English and I'm fickle like that. also, a lot of it is metal (see Al and AWM).
But I love Finland because it has been OK to me. Sweden has been all right to me, too, but it's been a hard love affair. Moldova, however, sucks.
So what to say about Finnish music?
Well, Husky Rescue was the first Finnish band I ever listened to and liked. A very relaxing little band. I haven't listened to them much lately, but take a listen:
There is also Scandinavian Music Group. Hurr:


DON'T ASK ME ABOUT THAT TITLE. I DON'T KNOW.


also, why do Finns love the Sounds so much? O_o


I mean, all their similar artists on last.fm are indeed Finnish. whatever. let's keep rolling rolling rolling like I'm Fred Durst and you're Wes Borland and it's 1999. yeah!


On Volcano is a lesser-known post-rock group worth checking out. A lot of their stuff is free on the interwebs.

my favorite though has to be Satellite Stories, who we interviewed a while ago. I love those boys.


ALSO:  Nokia is a Finnish company. believe it or not!

coming up:  last but not least ICELANDDDDD