Norway is like Sweden, but it has more money. And oil. Those are the key differences to keep in mind. Plus, the music isn't AS good. But that being said...


question:  what does Norway have the rest of the world lacks? 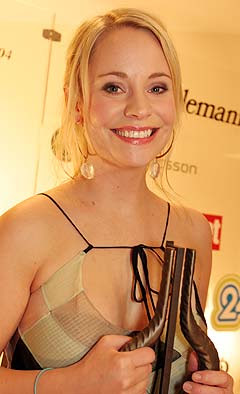 
Annie's last album came out in 2009, which is now a whopping three years ago. However, I somehow friended her on facebook (and Jennifer Egan I don't know don't even ask how this happens) and know she is putting out a new album this year. or I think. or I hope. or I pray, because that talking asteroid is coming for us in December, I SWEAR TO GOD.


Do you NOT know Annie? Do you live in the darkness (and not the kind of crappy band)? Here, feast yourself upon one of the best pop singers/DJs of our time:


but there's other great music from Norway!


btw, the best Norwegian I ever befriended was Dan. All Dan did was drink. I was supposed to meet up with him and outdrink him in Stockholm, but I was a little scared of waking up with sore orifices and a blank memory slate.


one of my friends compared them to Simon and Garfunkel. totally apt comparison, in my book. is there anything Erlend can't do? all his projects are amazing.

LET'S GO BACK IN TIME NOW
~ FANTASTIC VOYAGE ~
A-HA
sure they received brief fame here in America, but in Norway, they're still pretty big. shock of shocks.
THIS VIDEO ROOLZ
OK BACK TO THE PRESENT
fun fact:  I discovered Norway via a Roald Dahl book, Witches. I didn't know what the hell it was. I was like, polar bears??? (this was 1995 btw)
Royksopp!
the best kind of electronic music. seriously. ever. they've worked with Robyn and Lykke Li and Karin from the Knife, to show how incredible they are. Plus they were on a Geico commercial, so if that doesn't sell you...
Ane Brun!
arguably I always forget about her. why? good question. I don't know.
if you like sad folky girls, here you go:
WHAT'S UP NEXT ON THIS TRIP! DENMARKKKKKKKKKKKK