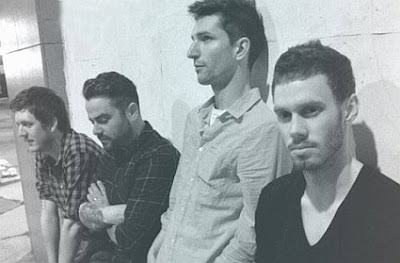 First of all, these guys were pretty nice!

SECOND
Who are these good-looking boys? Why, they are the Young Digerati and they recognize the hankering you have for some 1980s synthpop. If you like things that sound good....and you should....you will like them!
They recently toured the WEST COAST with Oh Land! Pretty dope, if you ask me. Oh wait; you didn't.
This is how they describe themselves:  Young Digerati are the architects of a synth-heavy, Anglo-centric, (small “r”) romantic sound that could have been built only in San Francisco (or in 1985).
read on to discover more....
because odds are, someday
YOU HEARD IT (read it?) here first ;)

So what's going on with you guys RIGHT now? - the dopes at the Useless Critic

Suave Young Band: Right now we're writing, writing, writing. We've put together a nice collection of about 25 songs and are adding more to that number weekly. We perform in Northern California mostly a couple times a month and are in the process of doing pre-production on our next EP which will be a 4 song release with a special "bonus track."That should be out before summer. We're following that release with touring.
You describe your music as "Anglocentric" a la Britpop. What made you go for that approach? - the UC

YD:   Great question. We've actually been described as "anglocentric" and it's nothing we are really conscious of. Young D started in my (Frank) bedroom as a bunch of tinkering around with vintage synths and songwriting ideas. It didn't really become Young Digerati until I hit up an old touring mate (Jeff) to write some top-line and help me finish the songs. He brought a batch of songs to the table as well and we really kinda just dove into creating something that made us feel the way our childhood did. To us that meant pure Pop melodies surrounded by a swirling mess of jangly guitars, arpeggiators, analog synths and drum machines a la Talk Talk, Pet Shop Boys and New  Order.
Your "Amanda" EP is up for free on the interwebs. What has the reaction been by fans, thus far?- UC

YD: So far it's been great. We've got loads of downloads from all around the world, airplay on Live105 and the attention of some really great people who are helping us take the Young D party to the next level ( Rocket Music ). Playing shows and hearing the crowds singing "The Dauphin" is by far the best feeling.

How have you grown as a band since your inception?- UC

YD:  Young D has definitely evolved over the last ... year or so? We released The Dauphin in March '11 but Jeff and I wrote it probably around October/November of '10. Since then we've really spent some important time putting together the right people to make the writing and live show the best it possibly could be. The addition of Kelly Aure and Tim O'Neill has really taken the live show to the next level with not only great musicianship but the harmonies ... OH THE HARMONIES! Both are great songwriters as well so their distinctive uniqueness has definitely lent itself to our newer songs.
What's your best moment so far as a group? - UC

YD:  That's tough. We recently played  a sold out show in San Francisco with our good friend, great musician and roster mate Oh Land (!!!!!!!!!!!!) Dancing and singing along with such a great crowd was a brilliant experience. We also just spent the holidays in London, where the rest of Rocket Music was gathered. Having lunch with Elton John, Lily Allen, our good buddies Friends, the High Highs and a number of others was really an adventure. That one is gonna be difficult to top, but we're trying!
What's coming up next for the Young Digerati?

YD:  We've got a number of shows we're gonna post on our facebook soon and then the release of the EP which we're SUPER pumped about.
What John Hughes film would you like to have been on the soundtrack of? - UC
YD:   That's such a difficult question!!! I'm gonna have to say Weird Science.


thanks to Young Digerati! check them out!