Some Men Just Want to Watch the World Burn 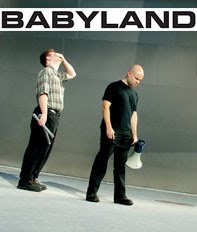 As of RECENT it has been my goal to listen through my CD collection meticulously and discard the refuse. It has been a slow-moving process, and there is much ground to cover.
And along the way I've rediscovered some greats.
I was supposed to attend a bar trivia game tonight, but my partners' in crimes' last minute decis'ion to go drinking in College Town US'A has' changed my plans'.
Thus, Babyland.

According to memory, Babyland WAS an "electronic junk punk" band from California. The two-man group was notable for its outdoor shows, where the percussionist, I guess, would bang on a variety of industrial equipment, use belt sanders on oil drums and other forms of madness. The premise is reminiscent of Einsturzende Neubauten's but the end result is a more kinetic experience, a sort of nihilistic, noisy dance music.
This particular album is called YOU SUCK CRAP. How cool is that?
If you could imagine a cross between Einsturzende Neubauten and Atari Teenage Riot, you'd be among the small minority that's familiar with those bands, German, over 30, and you'd understand what I'm talking about.
Babyland's work spans 20 years, culminating in their most mature work, Cavecraft. Allegedly, members of Babyland have gone on to smaller and worse things, but I've never heard any of it, so I am no authority on the subject.
Répondez, s'il vous plaît.