February 20, 2012
As of late I have been ordering a fair amount of CDs on Amazon.com. Most of them are Neil Young albums, and I am sure my reviews of those will be much anticipated. However, another treasure that I bought on a Whim is Dale Watson's Sun Sessions. 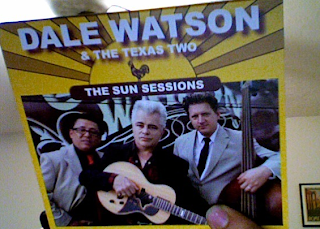 As the story goes, Watson was supposed to play a show in Memphis which was cancelled due to mishap, mismanagement or miscommunication. As a result, he called up Sun Studios and booked the date to record. What he produced?

Cash-twinged rockabilly of the highest order. Every song on Sun Sessions sounds like a Johnny Cash radio single. They're all very brief, and therefore so is the album. Some of the song topics seem trivial, bizarre, maybe even facetious, but it works. It's a fun album, and well worth it, even though you can't get a $5.00 copy on eBay to save your life. Blow the ten if you are into it.

P.S. Nader, I don't know how you take such glamorous photos of your discs, but I can't manage it with a MacBook.