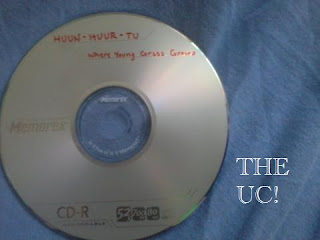 Since AWM sent me an enormous pile of music, I have been introduced to quite a few new artists and styles.
I picked up the CD entitled “Huun Huur Tu: Where Young Grass Grows.” From looking at the title, I had no idea what exactly to expect. I began to wonder

Is this Finnish Black Metal about Nature and the Earth Mother Goddess?

Or is it simply Estonian?

After a few seconds of listening to the first track, I learned it was from a little farther East than Finland, for it turned out to carry some sounds of the North Asian musicians. I want to guess Mongolia. Oh yes, it does contain throat singing. As I have said repeatedly, throat singing is probably the hardest taste in music, I’ve ever had to acquire. For example, the first few times I heard it, I was just baffled by the way it sounded, and when I play throat singing for people who have never heard it before, they often have a similar “WTF?” kind of experience.

This CD “Where Young Grass Grows,” sounds like a great one to introduce to people who are not super into World Music. It is smooth. It shows off the abilities of throat singing, but it is not so exotic and distant that it will scare them away. And YES, people can get scared of certain types of music.

One thing to note on this CD is the Strings. The stringed-instrumentals trump the throat singing such as on track 12, and they have a beautiful and smooth oriental sound. The part of Music from Mongolia, Tuva, and Northern China in general, which I like the most has to be the string arrangements….whether it is the Morin Khuur Horse-Head Fiddle, the Er-Hu, or even the Guqin Zither.

It only falls just below the 8 mark because as someone who has become a fan of throat singing, it wasn’t intense enough for me. It didn’t capture the full experiences of nature…bringing the sounds of the mountains crumbling to the human voice and all. No complaints on the stringed instruments. There are some nice vocals in this, but there are also some that are a little too faint.

Good stuff though. Since learning of them, I have found this song…good stuff.


QATFYG:
Have you ever met a Mongolian?