There are many pros and cons involved with documentary film making. I even had one friend once that stated “I don’t watch documentaries. They’re too one-sided.”
Of course, I doubt I would ever have the ability to the live that type of life, but many documentaries do present a single one-sided point of view.

All that aside, the major pros of documentary film making is that they are able to showcase the truth of real life to the world and present the general public and wide ranges of audiences with critical information.

After watching “Mugabe and the White African” on the 30 day Free Netflix Trial, that point has never sounded so clear. This documentary follows a white Caucasian farm-owning family living in Zimbabwe, and they receive a type of 21st Century discrimination.

The film begins with a quote from Zimbabwean President, Robert Mugabe, where he states he will be Hitler “Ten Fold.” That’s exactly it. I would have thought that someone was spreading that as a joke, if it hadn't come from a recording of the president himself. The film explores the campaigns and persecution of Mugabe’s corruption in Zimbabwe. It goes far beyond the typical ideas of African dictators, such as rigging elections, allowing the poor to starve, and manipulating the legal system.

This shows Mugabe’s attempt to form black supremacy in ZIM and literally to destroy the white identity and even to remove to presence of White Caucasians in the entire country. It evolves into a seldom discussed case of racist blacks attacking the minority whites. The film carries on in the legal battles between a Caucasian family in conflict with Mugabe and countless other black Africans as they maintain the right to own land and run a farm that was legally purchased in the post-independence of ZIM during the 1980’s.

What stands out about this film from other documentaries is, it is able to show some of the true brutality of the human race.

For example, so many documentaries appear to be filmed under secure conditions; however, “Mugabe and the White African” reveals that the white residents of Zimbabwe endure abuse, mistreatment, and beatings. It shows how a form of racism is growing in the world. 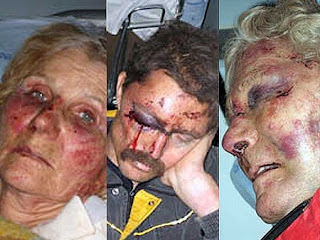 This film is tragic, and moments in it are heartbreaking. The real reason for that is, it does not get better in the end. When everything appears to have been resolved, and times of peace appear to be on the horizon. The film ends in darkness.