Doctor Who: A Beginner's Introduction 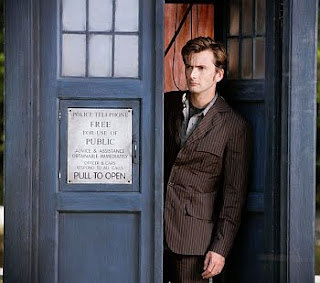 In search of some new sci-fi and out of genuine interest having heard the name of the series bandied about for years, I have recently begun DVR-ing episodes of Doctor Who on BBC America and I'm finding myself quite thrilled with the results. Having seen only about ten (or fewer) episodes, it seems unfair to write a "review" of the series, especially given its scope, but it's always nice to write about something when you've got the muse, and I haven't seen the Hunger Games (is Taylor Swift in it?), so this'll have to do.
The Doctor is time-shifting alien who has been on and off the air since 1963, in one of the most storied sci-fi franchises known to man. He pops in and out of different times, places and planets, makes quirky remarks, generally stirs up trouble and then resolves it. His objective? I'm still waiting to find out, but he has been to Mars, Ancient Rome and the end of the universe, all in the span of several short episodes, hunting down aliens who are kerfuffling with the time line.
The episodes I've seen star David Tennant (known to Americans as Barty Crouch, Jr. of Harry Potter fame), but the role has been played by 11 different actors since its inception, and he is said to have lived for over 900 years in different incarnations.
Hear Craig Ferguson explain the plot in this musical segment.

doctor who
Labels: doctor who