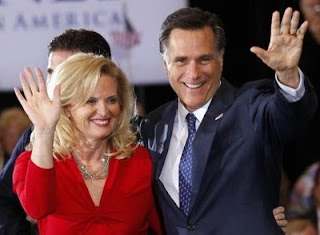 Ann Romney, the wife of the GOP presidential frontrunner Mitthew Romney, has already been called many new names on the campaign trail. She has earned the titles of everything from Soccer Mom to person next to her husband to now “Fundraising Power house, reaching the voters in a way that her husband can’t” so says the AP.

The latest name-calling on Ann Romney has done more than just shedding light on someone who clearly seeks a new job with more desire than Gene Simmons in an 80’s brothel; it has shown us how possible the chance is she might actually serve as first lady, meaning she would have to fill ALL the duties of Michelle Obama. 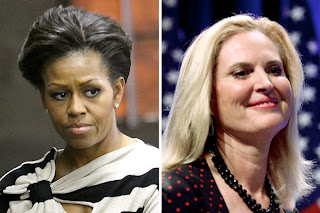 So Ann Romney:
Do you think you are up to the challenge of becoming First Lady?

To become First Lady, you have to guest star on iCarly, eat a bunch of junk food on the FoodNetwork, deal with Michelle Malkin (maybe in bed), and don’t forget that you will have to wear tank tops on “The View”, or else Barbara Walters and her gang will run their mouths off for the next four years about how “you know Michelle Obama just had such great arms. Why doesn’t Ann Romney wear bathing suits? We should invite her for muscular-therapy?”

Do you really want that to be your life?
Don’t let that happen.

At this point, who cares who wins as first lady? Just make sure the people on “The View” shut the heck up and don’t get spammed around the late night news.