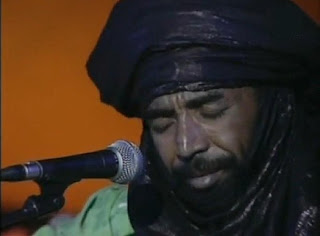 Hello Again from Africa, the Tuareg of the Sahara have been in the news a lot lately regarding issues in Mali, but on another side, the Tuareg have also produced the great musician Athmane Bali.

During 2011, I launched the worst failed experiment since the Soviet Union and created the Useless Critic Online Radio. It was an embarrassingly horrible combination of online talk radio and not-so-horrible musical uploads.

Most of the UC Online Radio has been deleted out of either shame or practicality; sometimes they are not so different. The best of the uploads come from the music of Athmane Bali, the true man in blue. Such as this gem from "Amin Amin."


This video below is the song "Aasarouf," and the spelling of that varies. It stands as the highest viewed video on TheUselessCritic youtube channel.

For some reason, I really wanted to sing this song for Demi Lovato. Well, I'll do that after she lifts my restraining order.