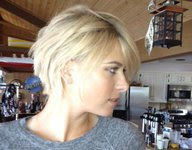 My favorite woman on Earth (emphasize on Earth), Russian Tennis Star Maria Sharapova, has gone for a new hairstyle, and it is a bob meets a punk. I am getting some mixed feelings. I don't know if I want to fu*k her or ignore her and then awkwardly ask if she has a more attractive sister.

In lousier news, my favorite woman on Earth (just on Earth) is also set to get married this year to some man named Whodahell Givesashit. In all honesty, I thought Maria Sharapova was going to marry me, even though I'd have to stand on a box just to do her doggy style. Imagine a pug harassing a rottweiler.

QATFYG:
What do you think?