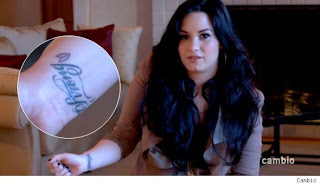 After a year of distress and destruction, Demi Lovato encountered the darkness. Most famously, the singing pop star was noted for the controversial move of hiding marks from cutting herself with a razor, as the public relations department covered it up and called it “imprints from bracelets.”

In fact, they were not so. She went on to one of the more publicized trips to emotional rehab. Afterward, she covered the markings with the tattooed word, “Strong” on her right arm. She later on added “Stay” on her left arm, making “Stay Strong” together. 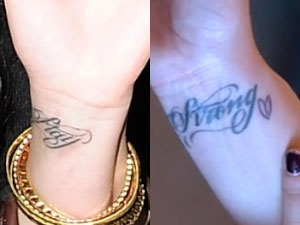 This one has a lot of personal meaning, and it comes with an emotional story. Out of the darkness, Demi was able to share a message with her fans of all ages and inform the world about the dangers of cutting. The second meaning was a message to the media to shut up her about her problems. One tattoo said both "stand up" and "fuck off" at the same time.

Questions for You: When was the last time something related to Disney was on here? I almost miss those days…almost :p. Click HERE for Number 10.