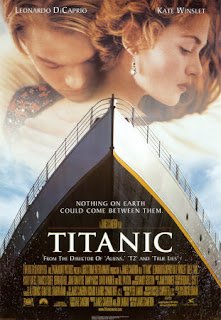 It might be out of respect, but it might also be out of sensationalism. However, this week here at The UC is Titanic Week. Yes, that's right the film before Kate and Leo did "Revolutionary Road."

People say a lot both ways about "Titanic" as a film, yet what one cannot deny is during the late 90's, this was the most talked about subject of all time, even more than that Y2K stuff. "Titanic" became a household name, and it also stands as the most captivating film where you only get to see one boob.

QATFYG:
Did you buy the double VHS Box Set?
Yep.