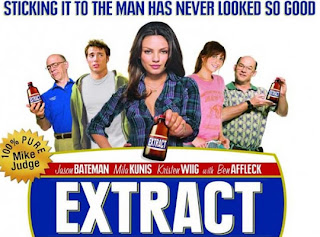 When it comes to the filmmaking of Mike Judge, of course I was a fan of "Office Space," "King of the Hill," "Beavis and Butthead," and even "Idiocracy." So I greatly awaited what this film had to offer.

The premise is Jason Bateman is trying to fuck Mila Kunis :P
So far off to a good start.

Anyway, the plan backfires when it turns out Kristen Wiig is secretly a loose cannon vagina and sleeps with Dustin over and over like a conveyer belt (get it, in an out?). It is no surprise that she makes hairy Ben Affleck look like an idiot. There are some other characters involved, but they are not important.

Some other reviews online (from some dude named Ebert) read that it was just too unbelievable for Kristen Wiig to sleep with Dustin Milligan because he was a dirty pool boy. Yes, it is true. He was a dirty pool boy, and maybe it was too much for them to do it 15 times a weekend :&


In Conclusion:
This is not Mike Judge's best film. Imagine "Office Space" set in a factory. It is not his funniest, but it is worth watching once, and then, it is worth watching twice where you find yourself laughing at it, and not with it.
As long as you're laughing.