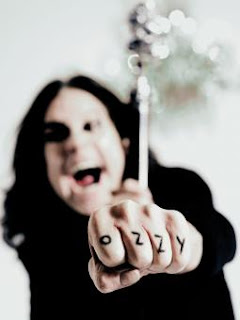 It's small yet simple, but just four letters became one of the most iconic tattoos of the 20th century. In fact, the four letters on Ozzy Osbourne's hand became a major mark of all rock and heavy metal for decades.

It was said that Ozzy Osbourne chose to get these tattoos during an early stint in prison, two smiley faces on his knees and the word "Ozzy" tattooed on his hand.

I was just listening to Black Sabbath's "Paranoid" and "NIB" yesterday, and those songs are just so good. There is an unmatchable raw sound and feeling, and "Ozzy" is more than just a tattoo, it is a legend.

Questions for You:
What do you think of people with tattoos of their own name?
Other than this one, I'm not the hugest fan. Exception of Awesomeness.