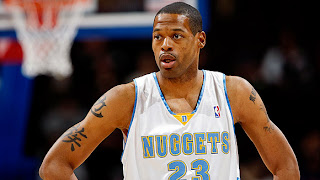 Marcus Camby is known as one of the few players to have worn six different jerseys in his career in NBA. However, he vaults onto the countdown for no reason other than ink. After all, tattoos are recorded as an NBA statistic. 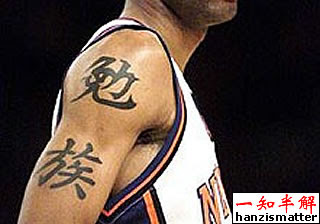 When it comes to Chinese Character tattoos, I am normally not a fan. Very few Chinese character tattoos stand out because…there are simply just so many of them. What puts a tattoo over the edge is its combination of the following: bold presence, dominates the canvass, and it has to be large. The larger the Chinese Character, the bolder and more domination it stands out. Marcus Camby’s Chinese characters stand out well, and they even have a smooth look to them.

Meaning of the Tattoos:
One of the characters means “To Strive.” The other means “Tribe or Family.”

Questions for You:
What’s a better tattoo script? Chinese or Japanese? And Does anyone remember when Lamar Odom was drafted by the Clippers? PS: I may have just listed a bunch of criteria for Chinese Character tattoos, But if you’re this girl, just keep doing what you’re doing. 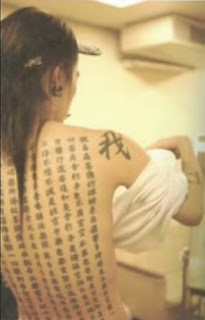