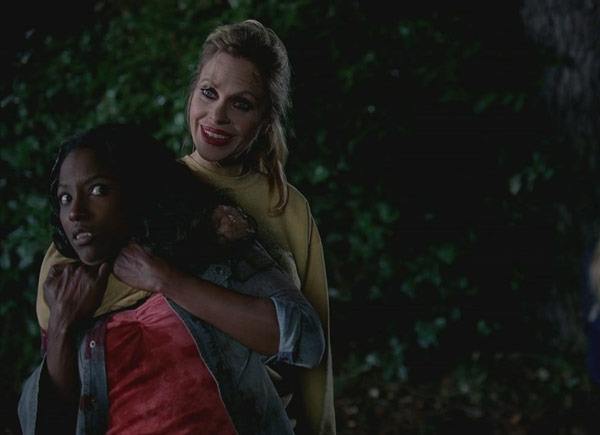 Well here we are again, time to sink our twin hard-ons into the new episode! Before I get into the thick of things, again I must let you know HERE BE MASSIVE SPOILERS. And I’m going to recap this by the characters instead of a timeline account, because not much happens in this episode.

Sookie, Lafayette, and Tara:
The episode picks up right where we left off. I wish I could say that means crying over Tara’s rotting corpse, but it isn’t. Tara’s a vampire now, and she sinks her fangs into Sookie’s neck (I can’t blame her. That is one sexy neck.). Pam, looking just awful in her Wal Mart jumpsuit, pulls Tara off Sookie before she can suck her dry. Pam commands Tara to not bite Lafayette or Sookie and to stay in the house, which she quickly trashes with her newfound vampire speed. And it’s a shame, because they just cleaned up! Lafayette and Sookie try to get her to drink some Tru Blood. And she freaks out some more.

Later, as morning approaches, Lafayette and Sookie trick Tara to get into her sunlight-proof room...by silvering her! Silver is like...something that really hurts us mortals. Poison ivy? Napalm? Thing is, vamps can’t heal with silver on or in them. I get a sick kind of pleasure when Sookie loops the silver chain over Tara’s neck.

With Tara safe and asleep for the day, Sookie’s going to...The Stake House? Oh, I get it, as in “stake a dirty, dirty vampire.” Words are fun! It’s a neat scene, if only for all of the anti-vampire weapons, silver, and other assorted stuff, like Silver Air, a colloidal silver automatic spray thingy. Sookie buys fifty.

And when Sookie gets back, she hears Lafayette with her convenient fairy telepathy powers that he’s going to stake Tara in her sleep. To which I say “PLEASE DO.” But Sookie brings him down and takes his stake away. So Tara gets to live for a little while longer. Joy.

That evening, Tara wakes up and runs away, vowing to never forgive either Sookie or Lafayette. Oh, but as she leaves, she gets blasted with some Silver Air! Ha HA!

Oh, and I checked the opening credits. Rutina Wesley is still a series regular. No offense to Rutina, but I think they've massively mishandled her character. This was all so silly.

Sam, Luna and Alcide:
Over at the werewolf BBQ, some of the wolves are still munching on Marcus’ entrails. Bonnie Raittwolf (aka Martha), says to Alcide there are “rules” regarding pack masters and responsibility and blah blah blah. Alcide doesn’t care. He doesn’t want to be in a pack, let alone lead one.  I’m sure all of this will come back to bite Alcide in his furry, well-toned ass.Oh, Sam and Luna are there, too, but they leave soon after Alcide does.

As the two of them make it back to Luna’s, Bonnie Raittwolf is close behind. She comes in and basically pleads for visitation rights, because Emma (Luna’s daughter) is totally gonna be a werewolf (you see, Luna is a shifter, like Sam, but she had a daughter with a werewolf, so who knows what Emma will be?).  After she's stirred the emotions pot she leaves, and Sam and Luna have a huge fight about shifter and werewolf parenting. Sam leaves.

We don't see either of them until Luna checks in on Emma, and congratulations! It’s a werewolf (allegedly)!

Terry, Arlene, Jason and Hoyt (and any other annoying characters):
Terry has one or two scenes where he has brief flashbacks to Iraq, and freaks Arlene out. Arlene seeks out Patrick for answers, but he’s silent until Terry shows up. Apparently, one of their old, crazy war buddies is still alive, living off the grid. So yeah. Moving on.

Yawn. Jason and Andy find Debbie Pelt’s SUV abandoned. What’s going on in the next paragraph?

At the Sheriff’s Department, thrill as Jason watches TV and eats Popchips! Thrill even more as some kid punches him in the face for screwing his mom! Thrill as—okay, enough of this.

Later, Jason visits Hoyt to make amends, but—surprise—Hoyt is having none of it, yet again.

Pam and Jessica:
At Fangtasia, the local vampire club, Pam brushes past Ginger, the resident...what does Ginger do, aside from being a constant source of amusement? She wonders why Pam is so dirty. "I was in the ground, what's your excuse?" Pam retorts. She also has a brief flashback (lots of flashbacks today) to San Francisco in 1905, where she was the madam at a brothel. Oh, and someone murdered one of her girls.

In another flashback, we witness Pam and Eric’s first meeting! He saves her from that whore-murderer. And then the scene ends?! Give us more of this, dammit!

Looks like Jessica is still partying with college kids. But what’s this? Reverend Steve? Seems as if he’s still hung up on Jason, and he offers Jessica $10,000 for him. She counters with $20,000, because his ass is so chiseled “you could chip a fang on it.” After some back and forth, Jessica and Steve throw down. And when I say “throw down” I mean “pulling hair.” As she kicks Steve out, proclaiming that her maker, Bill, is still king, Steve claims to know better.


In this episode’s best storyline, Bill and Eric (and to a lesser degree, Nora) are in the clutches of the Authority. We’re also introduced to Salome, a vampire with an Isabella Rossellini sensibility. She smacks Nora for, you know, betraying everyone that trusted her. Also, can I say how much I enjoyed the score on this show? This scene had some great atmospheric music.

Salome takes the three prisoners down beneath a warehouse. She touches a high-tech fingerprint/blood pad. A door opens into a modern receptionist area, with well-dressed vampires scurrying about. It’s an interesting contrast, and one of the cooler moments of the episode. They make a note to highlight a portrait of a male vampire on the wall. Not sure if it’s supposed to be Roman? In any case, they throw our trio into holding cells that remind me of the Initiative cells in Buffy the Vampire Slayer. (Not the cells, per se, but the whole scene reminded me of it.)

In vampire prison, the gang talks to another captive vamp, who I like to call Nigel the Baby Eater. They also get zapped with a UV light, kind of like a vampire bug-zapper.

Later on, Bill and Eric (but suspiciously not Nora...) get tortured by Salome and Dieter the Expositional Vampire. They use pure silver and inject it into their veins! Yikes! Oh, did you know the vampires have their own bible? It’s called the...Vampire Bible. Yeah, I know, real original. But apparently, some vampires take what’s in it literally. Especially the part where it says humans are just food for vampires. Do I smell a bit of social commentary here? Vampires taking their bible as actual truth; I bet they also ignore certain parts that don't gel with their worldview.

Mercifully, the final scenes take place in the ominous meeting room of the Authority Council. We’ve got all your favorites! Black vampire from Spartacus! Stuck up businesswoman vampire! Angry little kid vampire!

But really, you’re all reading this because you want me to freak out over Roman, don’t you? Let me say, I think Christopher Meloni relishes this role. He’s so suave and sexy and commanding. I almost wet myself (sexually) when he said “I am the Authority!” So, Roman is the leader of the Authority (the entire Authority? Or just this region?) and it’s his task to ultimately decide the fates of Bill and Eric. Nora is there, but they take her out of the room. Methinks a bit of a double-cross is in her future. After Roman leads the vampire version of saying grace, he goes into this speech about how vampires and humans should co-exist. There is also a fundamentalist cult called the Sanguinistas, who believe vampires are the superior race. They don't get along.

Bill knows he and Eric are screwed. So, in a twist, he offers up Russell Edgington instead. In exchage for their lives, Bill and Eric will hunt the insidious vamp down. Instead of staking Bill and Eric (and believe me, he really wanted to), he takes the offer.

The final scene shows an injured—but very much alive, and healing—Russel. (I couldn't find a decent photo of it. Investigate for yourself.)

Least Favorite Moment: I feel like this will become a trend. Everything and everyone involving Jason, except for Jessica.

OMG Moment: I don't know if there really was one. Certainly plenty of good moments. But nothing OMG worthy. Not even any nudity!

Overall I thought this episode was boring. It felt more like a placeholder until next week. Don't get me wrong, I thought all the vampire stuff was great, but every other story just dragged. But what say you? Did you think this episode was a snoozefest? Or did it make you thirsty for more?