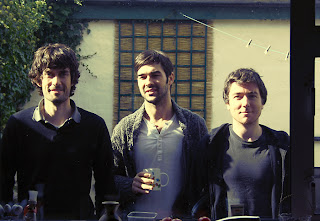 Perhaps it's only appropiate I am posting this on Bloomsday 2012. Anyway, here's a short interview with a band you should give a chance WHEN you have the chance, Autumn Owls! With a name like that, they have to be post-rock, right?

Thanks to Brian McKinney, for setting this up for me!

UC:  What's the story behind the Autumn Owls?


AO:  Autumn Owls are 3 handsome men from Dublin, Ireland. We formed in 2007, converted a shed into a studio, and wrote lots of music. 2008 saw the release of two EP's Insomnia Lodge and On The Trail Of The Disappearing. Since then we have toured in the USA (taking in New York, Chicago and Las Vegas on our way to SXSW in Austin Texas, then returned to New York for CMJ later that year), Canada (where we visited Toronto for NXNE and CMW), Latvia for Positivus Festival, and of course the UK and Ireland. We are currently recording our debut album in Chicago.

UC:  How was preparing your latest album?

AO:  Slow, thoughtful, carefully arranged and slow… preparations for our new album were quite lengthy, as we spent a lot of time touring. But once we got a group of songs together that we liked we were able to test them out in a live setting. Preparations for the studio were meticulous, as we only had two weeks with our producer, Brian Deck.

UC:  What sort of stuff inspires you, in general?


AO:  Everything. The smallest most insignificant thing can inspire you in some way, even if it means nothing to someone else.


UC:  How does the Ireland music scene compare to the United States music scene?

AO:  The Irish music scene is a lot more close-knit. Everybody knows each other in some way or another, and there is only really five or six good venues, so you will inevitably cross paths with the same bands on a couple of occasions. Where as the United States is obviously much bigger with more musicians and more venues, so the chances of bands knowing each other is much smaller
UC:  What are your musical aspirations?

(I guess that was a "duh" question)
UC:  What would you like to tell your fans right now?

AO:  We are putting the finishing touches on our debut album, Between Buildings, Towards the Sea which will be available later this year. In the meantime you can keep up to date with our touring schedule and other announcements at http://www.autumnowls.com/, www.facebook.com/autumnowls, or www.twitter.com/autumnowls.

By later this year I think they mean "October." Thanks boys!