Let's not act like this wasn't a huge scandal when it developed. It was. At the time, Meg Ryan (this was the turn of the century, don't you remember?) a BIG DEAL.

Yes, I don't quite remember if Kate and Leopold, perhaps one of her finer achievements, had come out yet, but it was certainly around that cusp. Meg Ryan, Reigning Queen of RomCom, a title she never totally bequeathed to anyone, be they Kate Hudson or Jennifer Lopez or Reese Witherspoon, etc. Brittany Murphy probably had something of a chance, but she is in a better place now. And I don't mean Taco Bell.

At this point, Meg had been married to Dennis Quaid for a number of years. They met on the set of some film NOT GONNA IMDB THAT BECAUSE I'M BETTER THAN THAT. They were enjoying one of the most successful and long-running marriages in Hollywood. Although, we secretly wish she had just married Tom Hanks. Or Nicholas Cage. Did I just type that sentence?

In an ill-fated attempted to break character, Meg was trying to do a serious film called Proof of Life. No one really knows what this film is about because no one saw it. I hear it may have been destroyed. Well, regardless, this picture speaks a 1000 words. A 1000 words that say "this movie has no plot." 'Nuff said. 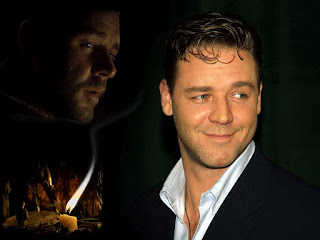 They began a hot and heavy affair. Russell was kind of "king of the world" then, so to speak. Don't ask me how he screwed that up- Gladiator had just come out, for instance. We all know Meg's problem (her agent used crystal meth obviously and a lot of it). Although film critics would accuse the two of having no chemistry on screen, in real life, they had something, all right. And that's probably a lot of tantric sex. Meg would later say Dennis had cheated on her several times during their marriage; girl was probably not getting any. And I mean all of a sudden she's working with Russell in his prime. So good for her! I hope she ironed a shirt on his chest or something.

The news BLEW UP. Blew up. Entertainment Tonight had the latest scoop on this piece of Pulitzer-prize deserving journalism every night. I mean, if they had to gone to Starbucks at 6 A.M. you would HAVE KNOWN. Much less if Meg Ryan had made the walk of shame back from his apartment in the early afternoon, with hangover sunglasses on and a look of "where am I?" that Anne "Call Me Crazy" Heche couldn't top. Dennis and Meg got a divorce; then eventually Russell dumped our dear Meg and went on with his life, marrying someone else and having kids and still trying with that band of his. Six Foot of Something? Don't ask me, I only take Eddie Murphy's musical career seriously.
Meg Ryan's title of RomCom Goddess Extraordinaire would soon be toppled; I blame In the Cut. She has tried very hard to get back on her feet and has dome some work, most notably playing a Mrs. Robinson-like character to Adam Brody in a film from 2009. But she's never recaptured that spark that made us fall in love with her. She has, though, began dating JOHN COUGAR MELLENCAMP.

Russell will be seen in Les Miserables with Anne Hathaway (!!!!!) so who really wins this one? The answer is clear as freshly polished crystal:  Dennis Quaid!

Question:  Do you think Meg (or Russell, for that matter) will ever have a comeback? Or is this karma of the Quaid curse?


Join me tomorrow on this fantastic voyage....