A preview of what is to come. 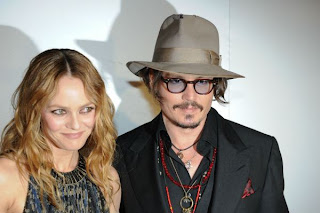 So as one countdown ends, another begins. And thus this week I will be unveiling "My Top Ten Pop Culture Moments That Were of No Significance To You." I hope it will be a wonderful traipse down memory lane for us pop culture junkies; I will even hold your hand!

Thus, consider this following post a taste of what to expect.

Johnny Depp Seperates From "Life Partner" Vanessa Paradis; Was Apparently Getting a Lot of Poon In the Meantime

Fangirls internationally rejoiced at this news, I'd assume. For me I've typically thought Johnny was a pretty stand-up guy. I mean, he's got a solid acting career, he seems decent and his relationship with the gorgeous and talented Miss Paradis lasted some 14 years. I always thought that was impressive, y'know? Except I can't go apeshit for him like some people I know, which includes my thirteen-year-old cousin, who the last I knew had just discovered the Pirates series and was subsequently enthralled.

However, Johnny's fairly-clean (let's not rehash the 1990s:  WINONA RYDER AND KATE MOSS ARE OLD NEWS) image has taken a fair share of mudslinging over the course of this past year, when his non-marriage to Paradis (who is an accomplished French singer, btw) was on shaky ground to begin with. Of course, that's a private matter, but TMZ always has someone in the know. If I had famous friends, you BET I'd sell them out for money. $$$$$

The big development was the fact that Johnny Depp was dipping his pen in company ink:  with a.) costar Amber Heard* (who is infamously bisexual, like that really matters, Hollywood, stop beating that to death) and b.) his publicist (I Do Not Know Her Name). Are there others? MMMMMMMMMM. I'd say it's likely, but me, being a product of Disney films, prefers not to think so.

So what happened? Did Johnny get restless? Do all men in long-term relationships of that nature end up cheating if they are famous and considered, generally, to be one of the best-looking and most talented in the entertainment business?

And like the tale of Tiger Woods and his Swedish supermodel wife, I'm totally baffled as to why you'd cheat on VANESSA PARADIS. She is one of those women that are so gorgeous I hurt a bit to look at them for long. 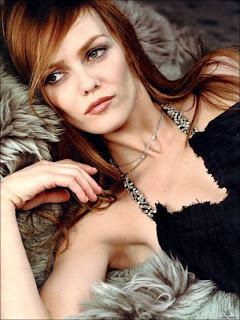 Johnny:  what the hell!

Now:  they are both on the market (supposedly, there seems to be a lot of Ross-and-Rachel shit going on with these two AND I JUST CAN'T KEEP UP WITH IT IT STRESSES ME OUT). Which is good news for anyone that could sleep with these two, which does not include me.

Albeit, it seems Johnny is pretty focused on Amber Heard right now.

And also, as much as I'm sick of hearing about this story, I will take it over any more developments from these two