Drew may be goo, but this True Blood recap is super-fresh! 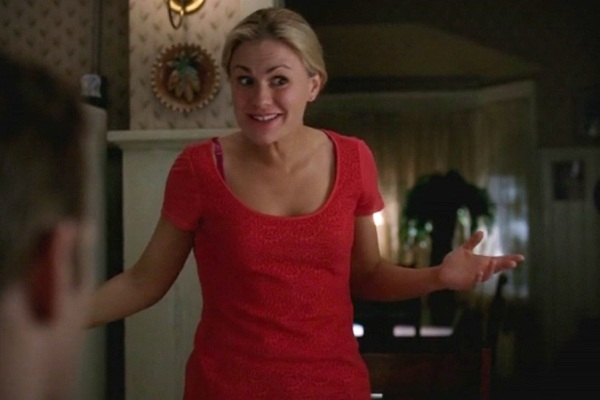 You know, it really seemed like a lot happened in this episode. But when I finished writing this recap, I noticed I hadn’t written all that much. An entertaining installment? Of course! We found out some things, but all in all, this episode gave me the entertainment equivalent of blue balls.

Andy wakes up in the same naked predicament, featuring some great camerawork.

Jason and Andy investigate the murder of Sam’s shifter friends. After questioning Sam, Jason finds a wooden and silver bullet in a tree. Andy does some CSI thinking and figures out where the gunman was aiming. Jason has a moment of insight: supernatural beings have been murdering humans for centuries, and covering their tracks. Actually, Jason has been having a lot of revelatory moments this season. Does this mean our favorite sexy idiot is getting some smarts?

Sam goes to Luna’s to tell her the bad news. She cries, Sam comforts her. Emma makes some noise, but Sam doesn’t seem to notice that she should smell like a werewolf. Am I wrong about this? Sam has always had a sensitive nose. So why didn’t he smell werewolf? Unless Emma’s a shifter? Or it’s just sloppy writing.

He leaves, but there’s a problem. A pickup truck full of masked hillbillies (I’m assuming) shoot Sam in the gut. Luna comes out and gets shot as well. And it looks bad. Emma shifts and runs into the woods. The truck speeds away, leaving Sam and Luna to bleed to death. This whole scene made me sad. I don’t want either of them to die!

Three Really is Company
Terry and Pat get held prisoner by Eller (I could have sworn his name was Ellis last week). They think he’s the arsonist. Eller tells them it’s not him, but an evil spirit called an ifrit.

This causes Terry to have another flashback to Iraq. They survey the massacre, and Terry finds a lone survivor. Patrick orders Terry to kill her. Before Terry puts some more bullets in her, she curses them. Actually a pretty intense scene. The flashback goes on as they round up the bodies and set them alight. As the bodies burn, Terry sees a mysterious figure emerge from the flames.

Terry convinces Eller to set them free. And of course Patrick has to act like a douche and knocks Eller out. He doesn’t believe a word of it. Terry leaves the bunker and has a smoke. Patrick follows Terry out, leaving Eller to get burned alive by the smokey, swirling ifrit.

Did you notice they highlighted Terry’s zippo lighter a lot this episode. Makes me think the ifrit and it are connected somehow. But with this show, who knows?

Tara's Reasons Why Not
Tara looks like she’s adjusting to life as a vampire pretty well. Sexy new clothes, bar-tending at Fangtasia. Oh wait, she just tried to eat a patron. Whoops! Pam lays down the vampire law.

Later, Jessica has a chat with Tara. They’re both the new kids on the scene, and Jessica offers to be her vampire BFF. And it lasts for about an hour or two. Goth Hoyt shows up (looking kind of hot, I have to admit. Maybe it’s the eyeliner.) and Tara gets him in the bathroom stall. Only problem is, Jessica is in the next stall over. Cue Jessica vs Tara: frenemies forever! I think Tara has the advantage here. Sure, Jessica was trained by Bill, but Tara fights dirty, oh and all that lesbian cage fighting.

Vampire in Chief (I know, I know. These chapter puns are all awful. But this one especially.)
Not a whole lot going on at the Authority. Nora’s still a prisoner. The vampire clean-up crew are scrubbing Drew out of the carpet (seriously, what a shit job! Vampire janitor?). Salome struts around, talks with Roman. He’s broken up about Drew’s betrayal, and possibly a crisis of faith. Salome informs him the Sanguinistas are growing more powerful. To which Roman replies, “Yes, no shit.” He doesn’t know how to proceed, but Salome tells him to give the religious movement a ray of hope. Or something. He later gives a speech about vampires and humans living as equals. Blah blah. Roman's not shirtless and/or staking someone? Moving on.

Lafayette the Brick-a-Brak Slayer
Lafayette freaked out, smashed all his religious iconography, and asked Jesus—his dead boyfriend, not the son of god—for help. You know, the first step is accepting you’ve been possessed by an angry demon. He doesn’t get an answer until later, when he has a dream (?) of Jesus’ decapitated head with his mouth sewn shut. This vision comes to Lafayette’s mother as well. So I can only imagine we’ll be seeing more of her.

True Blood: Mystery Incorporated
This is quite possibly one of my favorite Sookie episodes. First, she’s making out with Alcide, getting hot and heavy. His belt comes off, and she pukes on his feet. Also, True Blood’s two biggest cockblocks are there. Can’t Sookie have pukey sex without her vampire exes showing up to ruin it?

Fun fact, this episode was written by Angela Robinson, one of the better writers on the latter seasons of The L Word. “A 3,000-year-old vampire wants to suck my blood—it must be Thursday!” That’s just one example of Robinson’s flair for clever and funny dialogue.

B + E enlist Sookie to help them track down Russell. To their surprise, she’s more than willing. After she puts her head in her hands and laughs, that is.

They take her to the parking garage where Russell was buried to un-glamour Doug, the guy who was glamoured into breaking Russell free. Sookie uses her faerie telepathy, and sees Doug’s suppressed memories. A mysterious woman with an Authority pendant was responsible. Oh, and Russell looked like an adult fetus. Yes, that’s as gross as it sounds. B + E argue over who the woman could be. Bill thinks it’s Nora; Eric doesn’t. My money is on Salome, though. It’s odd that neither Bill nor Eric even bring her name up.

Hey, I should call these guys the V-Team! Cause they’re driving around in a van and solving mysteries! Wait, maybe they’re more like Scooby-Doo. I mean, Alcide is a wolf. So that means Eric is Fred. Sookie is kind of Velma and Daphne combined. Bill is...Shaggy? And Doug...Doug can be Scrappy-Do, cause he annoys the shit out of everyone.

So they pile into Alcide’s Mystery Machine and head for an old abandoned asylum. Nice touch. En route, B + E get a call from Molly, who informs them the iStakes strapped to their chests will activate at dawn. So no pressure to find Russell.

“Let’s split up,” says Bill. And even before I can say how anyone who ever says that always dies, Sookie tells it like it is. Not only is splitting up a terrible idea, she’s their protection, not the other way around (since her faerie powers work like sunlight, and well, she’s all kinds of kick-ass).

Alcide says wolves had been there, and that’s all he really offers this episode. You know, aside from almost getting naked earlier. They continue through the asylum, finding rats and dead bodies. Doug freaks out and runs into a room full of live humans strung up like meat. And instead of letting these poor people go, they leave them there! Serious dick move, True Blood.

They finally come upon Russell in his hospital bed, weak but apparently healed. Eric gets ready to stake him, but then Alcide growls and falls to the floor. WTF is going on?!

Favorite Moment: Sookie is the MVP this episode. Everything she did and said. And it feels good to not be a total bitch to Tara this week.

Least Favorite Moment: Hello, Sam! You were constantly two steps behind all episode. Didn’t you think Luna might be targeted? That being said, please don’t die. Thanks!

OMG Moment: Hmmm, how about when we were all excited to see Sookie and Alcide get it onnnnnn, and that totally didn’t happen. This is more of an OMG FUCK YOU moment. Seriously, do not make me watch Magic Mike to see Alcide naked.