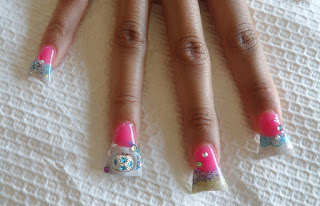 I was browsing the web this afternoon and came across this page outlining this new trend in the beauty world called “duck” or “flair” nails. Here’s a link if you are unfamiliar with them.

Essentially, they are fake nails that protrude from your finger, like the negative space in the Vulcan salute. The functionality of these things seems limited, but I’m sure they were invented with some purpose in mind. Typing on a keyboard and dialing a cellphone thus becomes a delicate task. I mean you can’t even hold your hands outright without the nails creeping in on their surrounding appendages. I suppose you could keep them trimmed low like any other acrylic nail, but for the price difference, it seems pointless.

God forbid your man likes a little pinky action, that would be one awkward clean-up. On the flip side, though, these seem pretty effective if you have to pick up large amounts of change or if you want to set yourself apart while flipping the bird.

To be completely fair though, these were all my initial thoughts this afternoon, sober. BUT, after a few glasses of wine, you better believe I was calling all the local nail salons and asking if they offered this new trend. They don’t…yet. After speaking at length with the confused salon workers, I found myself suddenly craving an egg roll and sauntered off to a nearby restaurant.

It would be fair to say I forgot my original intentions. But I do intend on trying these puppies as soon as Erie catches up the rest of 'Merica and its trends.


This guest post was by Kim, who I have known for a very long time and had the honor/distinction/dubious merit of graduating from Edinboro University of Pennsylvania's writing program with me. LOOK AT WHERE WE R NOW