Jesus Tits on Christ, it's a new True Blood recap! 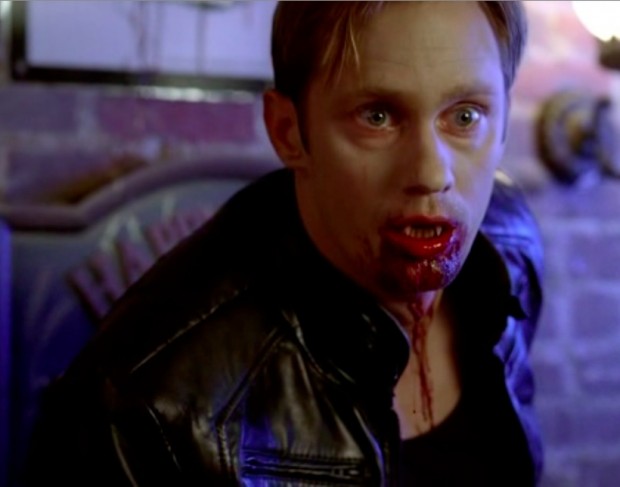 Episode 7: In the Beginning

As you all know, I was not a fan of last week’s episode. In this week’s installment we’re treated to faerie lights, torture, a very messy karaoke party, laughing smoke, and a vampire gets capped in the head. But was it an improvement over last time? Read on and find out!

How do they measure luminescence, anyway?
Sookie wakes up in the faerie burlesque house, where the British faerie guy and his sister (or something) check Sookie’s “luminescence,” aka her faerie abilities. The Brits say her power is finite, since she’s a half-fae. Sookie is obviously tempted at the idea of burning off her abilities and become a normal human. But methinks there’s more to it than that. The Brit faeries were cryptic about her being “fae no longer.”

The next morning, Jason brings Sookie breakfast in bed. They chat about finding out the truth about their parents together. And Jason eats Sookie’s bacon (literally, so all you fanfiction fans just calm down). These two are so freaking cute together.

Sookie goes to visit Sam and Luna in the hospital. Luna is raring to get out of bed, but Sam is having none of it. Sookie brings trashy magazines and junk food for Luna, who greatly appreciates it. Get well soon, Luna! Cause you won’t believe what your daughter has been up to in this episode.

Sookie buys Sam some coffee—and he seems a little too excited about it. Does he not have money for coffee? She calls Sam a “bulletproof hero” but Sam is too frustrated to hear her. Sookie asks if he could live a normal life, without his shifter abilities, would he? Sam says “no way” at first. He’d rather change people’s minds about shifters (and I’m assuming other supernatural types as well). But he does mention that if he didn’t have his abilities, the people he loves wouldn’t be in trouble or—in most cases—alive. I feel that’s a bit of a cop-out, but whatever; it’s what Sookie wanted to hear.

As Sookie gets home that evening—and seriously, does she even work anymore—she has flashbacks from the entire season about her powers. So she stands outside and tries to burn off all her icky faerie powers.

Woof, woof!
The police are investigating Junior’s death at Stakeland, and Sam helps in the only way he can: sniffing and rolling around on the floor, much to Kenya’s surprise. Oh, Kenya. He finds a box full of Obama masks. He’s on the right trail.

After he chats with Sookie, Sam goes to leave the hospital, when he catches a whiff of Obama hillbilly. He follows the man—who is either a nurse, or posing as one, I can’t recall—and tackles him and punches his lights out. Can I also mention that I love Sam’s shirts? They would look even better crumpled up at the foot of my bed. That’s right, I said it!
Woof, woof...woof.
Alcide also trains with female werewolf girl. And when I say train, I mean dry-hump each other.
Then Bonnie Raittwolf-Boner-Killer shows up to salt peter the shit out of them. She doesn’t know why Alcide wants to fight JD; she also doesn’t believe he’s high on V.

JD holds a pack meeting, where he says the end of days is coming. The vampire vs. humans war is upon them, and he’s gonna do a shit-ton of V and fight on Russell’s side. He starts handing out vials of V and tries to get Emma—tiny, adorable, Emma—to drink some! What an asshole. Luckily that’s just love in the form of Martha sneaking up on Emma (what? it’s a clever Bonnie Raitt joke!), who steals her away and stares down JD.

In “Oh, I totally see where this is going” news...
Hoyt hangs out with the murderous Obama hillbillies. He bitches about Jessica, and learns that “hate groups are about more than hate.” Sure thing. They ask Hoyt if he hates Jessica, and he says he does (spoiler alert from the future: he still loves her sooo much). They find out that Junior is dead, too.
The next night, Hoyt drives off with the Obama hillbillies. They have a “surprise” for him.

Jason shows up at Jessica’s house right as she’s having a late night snack. He breaks the news that his parents were killed by a vampire. Jessica tries to comfort him, and on instinct kisses him...with some dude’s blood on her lips. Whoops! They bicker, exchange some hurtful words, Jessica bites him, and Jason shoots her in the fucking head! She’s fine, but man, what a badass thing to do. He leaves, and goes to get in his car, when he sees a strange light coming from over at Sookie’s place...

So Tara is a dancer at Fangtasia now. And as annoying and exploitative as that sounds, it was actually pretty hilarious. Tara’s mom stops by to give her daughter the “you are dead to me” speech. Tara goes and cries in the back room. Pam offers her support, and she and Tara hug it out. As strange as the dynamic between these two is, it sort of works.
†††
Lafayette goes to scary guy’s house in the desert. I can’t muster up the energy to search imdb for his name, so I’ll just call him Santana. So, Santana’s house is open, and looking very David Lynch shiek, I must say (aka, creepy). Lafayette finds Jesus’ actual head on a chair, and gets held captive by Santana and his pregnant lady. He’s gonna take the spirit out of Lafayette and put it into his unborn child.

What happens next is pretty gross. Lafayette is tied up, and his mouth is sewn shut. Santana carves up his forehead and is about to do some amateur trepanning, when Mrs. Santana stabs the shit out of her man. Like, hardcore stabs him. With him dead, she frees our poor Lafayette. Brother just can’t catch a break, can he?

Oh, and this stuff totally happened, too.
Oh, and there’s a scene of Andy at former sheriff Dearborn’s place that I don’t even know why it was needed. And there was another scene with Arlene watching her and Terry’s wedding video. We see some familiar faces, and Holly comes in to tell Arlene like it is.

Terry and Patrick wait for the ifrit to come and kill them. It appears and it laughs at them. What a dick! Terry freaks out, grabs Patrick's gun, and tries to kill himself. Patrick fortunately talks him down by reminding him of the kids. But not Arlene for some reason. Oh well. Also, how is it they've gone this long and not made a single Lost joke?

Where's Aaliyah when you need her?
I saved all the vampire action for last, because it’s just that good. Well aside from when we find out that Roman is totally dead. Great, now I have to go back to lusting after Bill and Eric, so it ain’t all bad. After the Authority apprehend Russell—a little too easily, I should add—Bill and Eric find themselves in a cell once more, talking about who freed Russell. Like a skipping record, they say Nora. Then their attention turns to Molly, who essentially tells them to kiss her ass when they ask her if she’s a Sanguinista.

They get ushered into Salome’s quarters, and Nora and a freed Russell are there, too. Salome confesses she freed Russell from the concrete. Does this really surprise anyone? She gives Bill and Eric the chance to join the Sanguinista movement, but they decline. Instead of killing them, Salome “invites” them to join in the initiation ritual anyway. How nice of her! I will be so happy when she’s dead.

In the council chambers, Russell spews some Lilith nonsense. Salome wants everyone to drink Lilith’s blood (the council, Bill and Eric, that burned guy, and Steve Newlin, who’s just happy to be there). The one council member tries to stop it, and Russell rips his head off. Very nice. With that done, everyone takes a drink of Lilith’s blood. Eric is confident it won’t do a damn thing to them.
Cut to a very stoned group of vampires walking down the streets of what I assume is New Orleans. This scene is fantastic. One of my favorite so far this season. They all believe Lilith is leading them somewhere.

That somewhere happens to be a karaoke bar. This girl is singing an off-key version of “You Light Up My Life” when Russell decides to make it a duet.
The stoned vampires then make a bloody feast out of the entire bar. They all gorge themselves, and then a very bloody and naked Lilith shows up. She struts around and makes people feed. It’s all very Queen of the Damned.

As Eric feeds, Godrick (*swoon*) appears to him. He says he must save Nora. And for a second, Eric doesn’t see Lilith. Was it just a group hallucination? Or is Eric free from Lilith’s influence? We’ll just have to wait till next week!

Before I sign off, let's take a moment to remember my favorite dead character. Last season it was Tommy, this season it's Roman. Sigh...