This True Blood recap is shut tighter than bark on a tree! 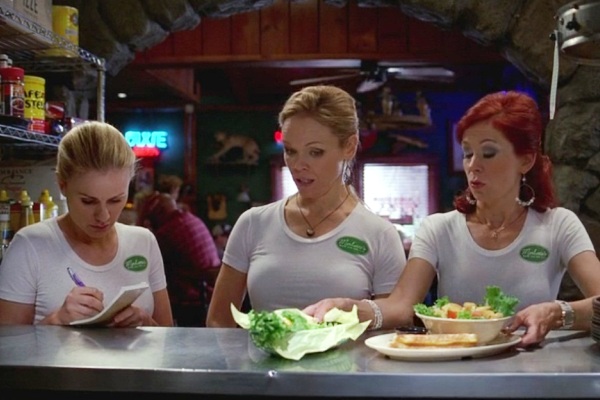 So, let's be honest. I struggled to appreciate this episode. Out of the previous five, this one seemed boring by comparison. Sure, we find out what happens with Sookie and Russell, and learn the fates of both Sam and Luna. But everything else seemed...sloppy. Oh, just read on. I'm sure you'll see what I mean.
Episode 6: Hopeless

Fun fact! About ten minutes into the episode, my power went out! Fortunately, it came back on within the hour. Don't worry, I saw every disappointing minute.

We pick up right where we left off. Wolves! It’s wolves! They attack our intrepid group, but they’re easily routed. Eric wants to stake Russell, but Bill stays his hand. And it’s a good thing, too. They can’t bring Russell back in a bucket. But before anyone can react, Authority troops file in and take over.

Vampire from Spartacus is concerned that Bill and Eric are at the asylum with a couple of humans. The boys cover for Sookie and Alcide as best they can. Spartacus Vamp orders B + E to glamour them. Bill fakes it with Sookie, since she can’t be glamoured, but he tells her what she needs to hear (and reminds us of all how cute they were together back in the day). Eric pulls a bit of fuckery with Alcide, making him believe that he finds Sookie disgusting.

The Authority leaves Sookie and Alcide to go home. Oh, and remember Doug and all those poor human captives? Yeah, they’re all totally dead now. Meanwhile, Bill tries to play along with the Authority (“all hail Lilith” or some shit), but Eric would rather have Lilith blow him.

The next morning, Alcide wakes up at Sookie’s house.

She’s in the kitchen, feeling bummed out after getting dumped by Bill again (and they weren’t even dating this time!). She takes his hand and he recoils. But Sookie’s not an idiot. She uses her faerie mind powers to un-glamour him. Alcide is pissed, now that he remembers that wolves from his own pack (kinda-sorta) were helping Russell once again. He storms out, and Sookie couldn’t care less.

Alcide goes back to his new pack and declares he’s looking to take over. Thing are never that easy, though. Turns out Bonnie Raittwolf’s cheating husband is the self-proclaimed leader now. Fortunately, Alcide has some allies, including that one werewolf woman from earlier in the season (does she have a name?).

Sookie meets that Brit faerie from last season, I guess (did anyone pay attention to that stuff?). He and Hadley fill Sookie and Jason in on the night their parents got murdered. Apparently a vamp was hungry for faerie blood, and he found some in the Stackhouse family car. We’re left to assume that the vamp killed the Stackhouses and staged the death as a drowning. Sookie wants nothing to do with it, tries to zap Brit faerie, but some other faeries get the drop on her.

Sam and Luna, thankfully, both arrive at the hospital. And they both seem to be okay for the moment. Luna is frantic about Emma, who has since run to Grandma Bonnie Raittwolf’s house. Sam tells the nurse to fuck off as he’s up and about and standing at Luna’s side. Luna asks an important question: Who would want to kill shifters? Sam knows that they’re human, which just complicates things further.

As Sam and Luna heal from their wounds, Grandma Raittwolf brings Emma to see Luna and Sam. Luna reluctantly asks Bonnie to keep her daughter safe. I wonder how long this kinder, gentler Bonnie Raittwolf will last. I think she has ulterior motives.

I guess Sam healed much faster than Luna, cause next thing we know he’s healed and helping Andy investigate the shifter murderers. Andy is reluctant to have Sam along, but Sam’s resolute, and has that vigilante look in his eyes.

They go to Stakeland and question Junior, the skeevy shop owner. Andy asks him about wooden bullets with silver cores (the ones that killed Sam’s shifter friends, remember?), when Junior pulls a gun. Sam shoots him with a crossbow, and says something about “smelling him go into survival mode.”

That’s all fine and dandy, but it seems like Sam has selective heightened senses this season. He can smell “survival mode” but he can’t smell a werewolf pup a room away?

Terry and Patrick get chased by the ifrit. Then they drive back from South Dakota in like a day (I don’t claim to understand how time works on this show). Terry freaks out. Again. Jumps out of the car, runs into the woods, gets tackled by Patrick. They overact and get back in the truck.

Terry then shows up at Merlotte’s and breaks up with Arlene. I feel like we should be sad about this, but I’m just nonplussed about it. Oh, and Arlene doesn’t believe in curses? After everything that’s happened to her over the past four seasons? Arlene pleads with him to stay, but he hugs her, says “thanks for taking a chance on me,” and leaves. And I thought this storyline was going somewhere, too.

Tara and Jessica’s fight falls into Fangtasia itself. Pam breaks it up, and offers Tara a backhanded compliment. Oh, and that song is “Bitch” by the fabulous Plasticines.

Jessica later has an uncomfortable conversation with Goth Hoyt, who thinks she’s still in love with him. The fighting with Tara aside, it doesn’t seem that way. Plus, Hoyt basically gives Jessica carte blanche to do anything to him, as long as it’s her. Oh, Hoyt. Desperation is so not sexy.

The last we see of Hoyt, he’s being drained by another vamp. But this time, some suspiciously familiar hillbillies in masks kill the vamp and take Hoyt with them.

Lafayette visits his mom in the loony bin. She’s crazy and hysterical as usual, and there’s some funny Jesus talk, but that’s it for La-La this episode.

Bill and Eric arrive at the Authority and—surprise—it’s a cocktail party! Or something. The council is all smiles now that Russell is safely imprisoned (aka pumped with a whole mess of silver). Molly takes their iStakes off, and Salome gets them some...blood champagne? Oh, those kooky vampires! Eric asks to see Nora, but Salome informs him that she’s confessed her Sanguinista allegiance.

Roman shows up with a jug of old vintage blood, and is all smiles. For the moment, it seems as if Bill and Eric have gained his trust. He later informs the council (and B + E) that he intends to execute Russell that very night. Salome looks strangely concerned about this. Also note that Roman tells her to fashion Russell with an iStake, cause he doesn’t want to get his ugly polo dirty.

Eric finally gets to see Nora, who is all kinds of crazy. She sees Authority agents carry Russell away for execution, and is lucid for the first time in as many episodes. She mutters something about Lilith’s plan and how events are happening as they should. This doesn’t bode well as Roman activates Russell’s iStake, and it doesn’t work. Russell, who until now was supposed to be incapacitated, gets the jump on Roman, and plunges a stake into his heart. Roman’s face goes all wonky as Nora prays in her cell. She best pray that Roman isn’t dead next episode or I will...well, I don’t know yet, but it won’t be pretty.

Favorite Moment: Well, Sam and Luna didn't die, so that's a plus. And Alcide was shirtless in a scene or two.

Least Favorite Moment: Do I have to pick just one? So much of this episode made me question what the hell is going on with this show. Sookie was uncharacteristically gloomy. Sam's powers happen at the whim of the writers. I still don't quite get the whole Lilith/Vampire Bible/Sanguinista/Mainstreaming thing. If someone can sum that clusterfuck up, I'd be grateful. And the dialogue itself lacked the cleverness it usually has (which troubles me, since this episode was written by series creator Alan Ball).

OMG Moment: How about that ending? I am not entirely certain that Roman is dead, because we weren't treated to a blood-splattery explosion. Still, True Blood, Roman is by far the most intriguing character you've had on this show in a while. Killing him now would be a mistake (pun intended).

Bonus: Can we just talk about how they seem to be setting up Salome as the one who freed Russell? And how that seems far too easy. I'm thinking it was either the Southern businesswoman vamp or Molly. But I don't want it to be Molly, because I love her. How about it was the ghost of Sophie-Anne?