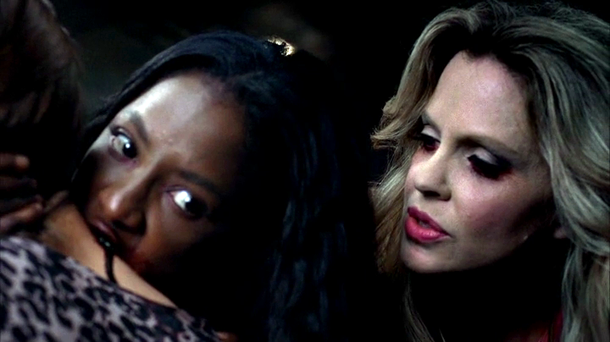 Sorry this recap is late again. I have a life, you know! I don’t just lounge around in my coffin like some lazy vampire that I won't name coughTaracough. Season five is hitting some sort of stride, and this episode answers a question or two and teases us with a few more, so let’s get to it! Oh, and by the way, True Blood just got picked up for a sixth season, so whatever crazy shit they have planned for the season finale won’t be the last.

Caring for your vampire offspring:

Picking up where the last episode ended, Tara is trying to get a nice even tan, except her pesky skin keeps falling off. Pam—Tara’s maker—stops by and commands her to stop. Tara’s cooking skin is disgusting and a great effect.

Pam takes Tara to Fangtasia, where they’re greeted by Bill and Eric (or, as I refer to them, B + E). They’ve been let go by the Authority to find Russell, and this was their first stop. As Eric talks to Pam, Bill takes Tara into the club’s office, where she puts on a ridiculously large Fangtasia t-shirt. And she wears it the entire fucking episode. While they wait, Tara offers Bill some surprising insight on Sookie.

Eric thinks Pam is the one that broke Russell out, for some reason. Pam is understandably pissed, and during a tense and angry moment, and asks Eric to release her. This is a huge deal as far as True Blood vamps are concerned. And seriously, Eric, has Pam ever given you a reason to doubt her?

B + E have a powwow after, and watching these two scratch their heads is pretty hilarious. And cute. Because they are never not cute. So, if it’s not Pam, and it’s not Nora, then who?

The next night, Bill goes off to check on his own problems, leaving Eric and Pam free to talk. I’m not kidding when I tell you this scene almost made me cry. Eric understands that searching for Russell is pretty much a death sentence either way, and he doesn’t want Pam to be a casualty of that. He releases her, not out of anger, but for the right reasons. He wants his bloodline to live on. *sniff* *sniff* What’s that? Oh, no, there’s just something in my eye... 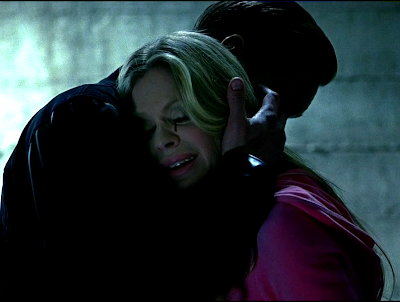 Later, Pam teaches Tara how to feed on something that’s not a bottle of True Blood. And you know what? I thought Tara was actually funny in this scene.
“You look very—”
“Delicious?”
“I was going to say ‘nice’...”
Maybe Tara will embrace her vampiric nature and be interesting again.

Over at the mansion, Bill has a similar conversation with Jessica that Eric did with Pam. Don’t worry, Bill doesn’t release her, but they do have a nice moment together. Jessica offers up some insight into Bill and Sookie’s relationship. He’s impressed by Jessica’s maturity, and I think we all are. She’s come a long way from seasons one and two.

The Authority, staken but not stirred (I apologize for that feeble attempt at a pun):

Woohoo! More shirtless Roman! He’s watching some Nora-torture-porn on his laptop. Salome swooshes around and suggests more torture; Nora will break eventually. Roman opts for a different course of action.

There is a brief scene where the Authority peanut gallery talks about stuff. Mostly about how they’re all cooler than Roman. Bitches, please.

Roman and Salome pay Nora a visit. She tells them to “fuck off” (which sounds even better in a British accent) until Roman pulls the B + E card and threatens to iStake them both. Nora almost breaks, and Salome offers her own vow that B + E will be safe if she gives up the other traitor in their midst. This is the first scene that I actually enjoyed Salome doing her thing. Her whole trust-through-sex manipulation last episode was trite.

After they get what they wanted from Nora, Roman meets with the council in one of the most interesting uses of a stake as a metaphor for an alpha male wang. He waves it around in their faces, talking about Judas and whatnot. But the meeting was really ruse; they found the traitor. Apparently the kid vampire made a nasty, bloody snuff tape and sent it with an encrypted message. As a result, Roman stakes the little shit. Huh, the even the little ones make a big splash. Roman makes a speech--while covered in baby-vampire blood--about not betraying him, but I was too busy feeling equal parts disgusted and turned on. This show makes me feel so conflicted sometimes.

Sookie was busy this episode. Seconds after she confesses to Alcide, Lafayette bitches her out and calls her the angel of death. “You survive, but you leave a trail of bodies behind.” So I guess they’re not hanging out anymore.

After work, Sookie goes to Jason’s to turn herself in. When she tells Jason the whole sordid mess, his reaction is pretty much perfect. Sookie doesn’t want to keep ruining people’s lives, and can you blame her? Also, Jessica overhears everything.

The next night, Sookie uses her mind-reading abilities to find out that everyone knows she turned Tara into a vamp. Oh, and one guy would “still hit that.” So, she does what any of us would do if we used our faerie powers to read minds and found out our hick town suddenly has some kind of ethics: she brakes out the booze!

But not before Lafayette lets out the demon inside and curses Sookie’s awful yellow car. As she speeds home with thoughts of Vodka and Bailey’s in her head, she has a Christine moment and her car wraps itself around a pole like it was a Christmas present. Don’t worry, Sookie jumped out before it hit. Good riddance, yellow car!

Sookie drinks and drinks some more. She’s singing her own lyrics to “Escape (The Pina Colada Song ‘80)” when Lafayette calls, but she hangs up on him when Alcide comes knocking.

The werewolf tells Sookie he pinned Debbie’s murder on dead pack-leader Marcus, so the Pelts won’t investigate any further. And Alcide did a good job of selling it; he cried and everything.

Sookie pours him a terrible drink and then they make out. I swear to Lilith, True Blood, we better get some sex next episode, because them necking on the couch was not enough. Also, B + E watched them through the window. Sookie needs to invest in some better curtains.

War, what is it good for? Flashbacks!

Terry and Patrick are on the search for squadmate Ellis. Terry nods off and we get an answer to one of True Blood’s smaller questions: What happened to Terry in Iraq?

Killed lots of civilians while high on drugs (LSD, I think) and whiskey is the short answer.

Although I think there will be more to it in future episodes. There is also a disturbingly beautiful shot of a city getting bombed. Sounds weird, I know.

They eventually find Ellis’ ranch, and a secret underground bunker filled with crazy firey stuff. Also guns. And paintings of fire. What I’m saying is that it’s all pretty incriminating. Oh, and then Ellis pulls a gun on them.

Here come the Judge (what? oh, like you thought of something better?):

So, that Judge that was in that one episode earlier in the season is back. And he’s taking the boys (Andy and Jason) out on the town! Well, not exactly “town” more like “burlesque faerie bar.”

At the Faerie Moulin Rouge, Andy runs into his old faerie booty-call, Morella, and Jason runs into...Hadley?! Apparently that’s where she and her son ran off to after Queen Sophie Anna went all explody. (If you don’t understand much of that, go back and rewatch the previous four seasons.)
Seems like she’s been there awhile, and thinks that the vampires have taken over—at one point she calls Jason a refugee. Hadley also lets out a vital piece of True Blood mythology: Sookie and Jason’s parents weren’t killed in a flood; they were murdered by vampires. Dun, dun, DUUNNNNNN

Favorite Moment: I enjoyed Jessica so much. When do I not, though? But I'm also excited we got some questions answered.

Least Favorite Moment: Why no Sam love? Sam didn’t do much this episode. He met his old shifter friends from last season. And they got killed. Probably more on this next episode, but don’t quote me on that.

OMG Moment: The feeding scene with Pam and Tara. In that I didn't roll my eyes at Tara.

How did you like this episode? I know it felt heavy on plot and not much else, but I think we've got quite the season ahead of us. And hopefully some Alcide/Sookie (Sookcide? Alookie?) nakedness next time!