Top 10 Reasons to Get Excited for the Olympics: #7 Abhinav Bindra and Team India 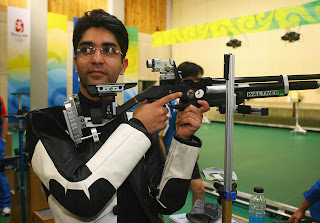 Top 10 Reasons to Get Excited for the Olympics: #7 Abhinav Bindra and Team India

No this is not a computer programming robot, it is an Olympic athlete.

I once asked someone why India had so few medalists and competitors in the Olympic games, and that person responded by saying that  “India has more important things to focus on than International sports like poverty and the well-being of all their people.” HMMM makes you wonder about what’s going on in China? Bastards.

However, it is a fact that India has not turned out the largest Olympic teams, and for a nation with over 1 Billion people, they certainly do not post the highest number of Medalists
It was in 2008 at the Beijing games that the man seen above in Full Robotic Computer Programming Armor won the First Gold Medal for India in the entire history of the Olympic Games.
Abhinav Bindra took Gold for shooting, ending a 112 year Gold Medal drought for the nation of India. Now after winning the world championships in shooting, Abhinav Bindra is coming back for the London games of 2012.This will be interesting to see if India can double their Gold medal count. Furthermore, it will be interesting as well to see which competitors from India will climb the ranks and achieve Gold medals as well.

Questions for You:
If you had your dream, which sport would you want a Gold medal in?
After this, I would definitely pick shooting….either that or Water Polo.