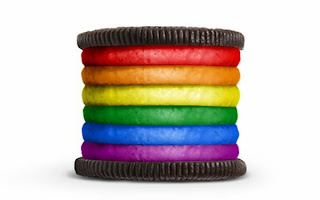 For the record I’m pretty liberal. I’m a fan of free speech and I think when we start censoring people we are chipping away at the fundamental “free” part of it. That being said freedom of speech applies to allllll sides of the dice. Liberal, conservative, moderate, extremist, etc.. In my opinion, as long as you are not threatening the physical well-being of a person, the statements you utter are completely protected. They may not always be morally correct (for example that Playboy Bunny who tweeted about finding humor in the Aurora Theater Massacre ) but they are protected all the same.

I say this all because the whole Chick-fil-a thing is beginning to annoy me. I’m for gay marriage. I don’t see the big freaking deal, but I can see how people who base their opinions on their religion would be opposed. When it comes down to it what’s-his-face had the right to state his opinion: The company was opposed to gay marriage.

Just like Oreo had the right to state their opinion: We support gay marriage. A corporation has the right to make their stance on an issue known. But in a society that is still divided on the issues,

THERE ARE GOING TO BE RAMIFICATIONS AND THIS SH*T SHOULD BE EXPECTED.

Especially when the consumer market can easily choose to just flat out stop buying your sh*t. Or buy more of it...

Maybe I’m just exhausted. This whole “Screw Oreo” or “I’m protesting Chick-fil-a,” thing is just annoying. Seriously. In 100 years none of this will be relevant. Our society will have leveled out by then. Whether it be my nuclear war, universal tolerance, or a utilitarian government. No one will remember your facebook posts about the homos being "immoral" or how right wings are "full of hate." No one. So let's just all hate who we want, eat what we want, Shut the f*ck up, and get fat off the blood of Capitalism.