Just how awful was tonight's America's Next Top Model premiere? 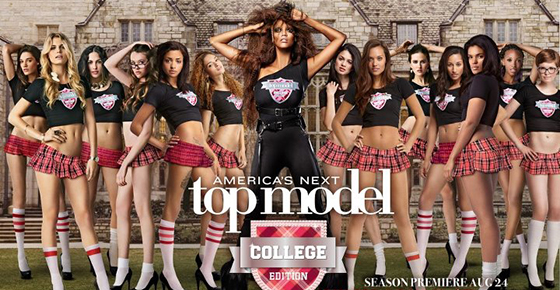 So, here we are, for this 19th cycle (aka season) of America's Next Top Model. In case you didn't know, Tyra in her infinite wisdom has fired Jay Manuel, Miss Jay Alexander and the steamy, dreamy Nigel Barker.

This season, Tyra, last season's lone survivor Kelly Cutrone and some other people who I haven't found the wherewithal to Google will serve as the judges. But wait! The audience has a say in the voting this time...or something. Apparently a few months ago, one could go onto the Top Model website and vote or upload videos or...you know what, I don't really know.
In any case, this season is the "College Edition." Which, gauging from the main photo, will involve slutty co-eds wearing tiny tartan skirts and being photoshopped to death. So, same shit, different judges. There is really only one thing I can say about this new season, and I'll let a certain someone who has an amazing show on Logo do the honors.

So, I guess Top Model's ratings haven't been as great lately. I guess I understand the need to switch things up a bit. After the debacle that was the All Stars season.

And the British Invasion season made me long for the actual Britain and Ireland's Next Top Model, which is hosted by the not-crazy Elle Macpherson and is really enjoyable to watch.

So, let's get started, shall we?

What is this? WHAT IS THIS? Tyra poolside, with some...thing in a blond wig. She's talking about how ANTM needs a change blah blah blah I went to Harvard and thought of the idea for this season blah blah blah.

Tyra shows up, looking skinnier than ever with some busted up hair.

She introduces the judges, Kelly Cutrone, Rob Evans (the male supermodel, kinda dull, nice accent though), Johnny Wujek (the replacement for Mr. Jay), and dot dot dot YOU as she points at the camera, effectively breaking the fourth wall and my MIND.

So, the girls have a "walk off," and I'm just waiting for someone to take off their tops. It already makes me nostalgic for Miss Jay and his catty comments.
This season Top Model is all about the social media!Tweeting and twittering and facebooking oh my. This show is so ultra-modern! The people at the walk off are on their smart phones and ipad knock-offs, pretending to text OMG GURL ROFL THIS SHIT IS LAME

First impressions of the girls: they are all skinny, some of them can walk, some can't. The judges cackle on the sidelines, and before you can say "mad grab for attention," the girls are off to their first photo shoot!

At one point Wujek actually says to one of the girls "show me some side prof." Next thing you know he'll be saying "booty too" and "sm."

We move to the interview portion, where Tyra molests a girl (no shock there), the girls talk about their sad lives and Tyra laps it up like it's mother's milk.
Oh, and I should add that they are taking a page from Britain's Next Top Model. The new set, new judges, and the college setting are all a bit too familiar.

Oh, and the one girl has a false tooth and can stick her hand in her mouth. Pretty sure she didn't get picked. Another girl has what I can best describe as a meow-versation with Tyra.
One of the contestants that stood out was Victoria, a homeschooled girl who goes to online college. She sounds dreadful, I know. But trust me. I think she's one to watch.

More sob stories, more catty bitches. I go to Harvard, but I'm pretty! I'm an aspiring bad girl! I can pose! I have daddy issues!

Every once in a while Tyra will say to one of the girls "You have so many likes on facebook!" Because, again, they're trying to be all hip and modern with the kids. Wow! This show is relevant in so many ways!

And then she whittles down the contestants to the final 13. This is pretty by the numbers. I always love and hate Top Model premiers. One the one hand, we get introduced to all the girls we'll love/loathe during the season. On the other, I just want to see some ridiculous challenges and photo shoots. Oh, and makeovers!

So to answer my question: How awful was it? Not as awful as I had imagined, yet somehow worse than I had expected. It's still the same show, but this online crap is just...lame. I don't know if I'll have the energy to recap this show week after week, but I'll probably keep watching. And hate-loving every minute of it.