Just like Lafayette, this True Blood recap did not see that coming. 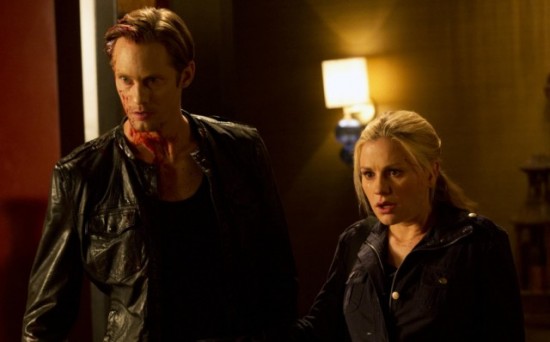 Wow, I’d call that a season finale, alright. Lots of blood, a bit of sexing, and more than a few “what the fuck did I just watch” moments. Oh, and an out-of-nowhere cliffhanger. I don’t use this word much, but it left me flabbergasted. Let’s get to it, shall we?
Picking up from last week, Russell drank up the faerie elder and attempts to break into the faeries’ clubhouse. Sookie and the rest try to blast him back, but he’s fueled on elder blood. Just when hope seems lost, Eric swoops in and stakes Russell.
It’s a fitting end (and some nice effects to go with it) for one of True Blood’s best villains; he got what he wanted, he just didn’t get to enjoy it for long. Goodbye, Russell. We’ll miss you!

Sookie finds an unconscious Jason, who has a vision of Mrs. Stackhouse. Oh, and Nora wants to get all up in Sookie’s blood, but Eric stops her.

Eric and Nora head to Fangtasia, where Tara informs them Pam’s been taken. Nora doesn’t understand why he’d want to go back into the lion’s den, but we all know why. And he calls Tara “family” which was kind of cute.

The three of them pay Sookie and Jason (who’s still having visions of bigoted Stackhouses, by the way). Eric needs her help to free Bill, and Tara reminds Sookie that she owes Pam for the whole turning Tara into a vampire thing.
While the trio of vamps sleep, Sookie and Jason stock up at Stakeland. She tries to reason with him but “that train has already sailed.” He’s ready to kill every vampire he sees.

That night, Sookie and Jason (with the vamps in tow) make for the Authority. On the way they talk about how depressing their relationships have been. Sookie dates dead guys, and Jason dates unavailable girls (and most of them are trashy). He also sees the worst in everything now, apparently, Methinks that bump on his head has made him crazy.

Eric, Nora and Tara wake up and bring their “prisoners” to the Authority. And thus our disparate storylines come together, which reminds me...


...what have Bill and the rest of the gang been up to? Well, the vamps bring a naked Sam to Bill, but Sam quickly turns into a fly and escapes when he realizes Bill is a few cards shy of a full deck.
With Bill offering no help, Sam canvases the joint, and finds Steve Newlin’s quarters. He hatches a plan with Luna, who as you’ll recall can shift into other people. She does a decent job of playing the part, and almost makes it out with Emma, until the Southern vamp lady takes her (and Sam as a fly) to a TV interview.

While there, Luna shifts back to herself in front of live television, and tell everyone about the holding cells at the Authority. Southern vamp goes to kill Luna...until Sam flies into her mouth...and then shifts back to human form inside of her. One of the best/grossest things this show has thought of. Also, Sam was naked this entire episode. So yay!


I should also recap the other (boring) people in this episode before we get to the good stuff. Well, not boring, just...distracting, we’ll call them.
Alcide takes some V and fights JD. He snaps JD’s neck and reclaims his right as pack master. This could have waited till next season, honestly. It would have taken five minutes.

The gang at Merlotte’s gets drunk and watches Mirella give orgasmic (no, seriously) birth to four of Andy’s children. And then she leaves with nary a child support payment. Okay, this scene was pretty damn funny, have to admit.


Alright now. On to the main event. After the scene with Sam, Bill berates the vampire troops for being incompetent. I can’t blame him, since they’ll all be red messes on the floor in a short while.

Bill does a bit of a mindfuck on Salome, telling her she’s the one Lilith wants. He fucks her, she drinks the vial of Lilith blood. Or so she thinks! Bill fooled her, and pulled a switcheroo, replacing the...true blood (sigh) with silver-laced ordinary blood. “Lilith chose wisely,” Salome says as Bill stakes her. Goodbye, Salome. We’ll miss your extensions. Oh, and before she died, Bill told her she had a case of “monumental narcissism.” Indeed.

Elsewhere in the Authority, Pam and Jessica sit in their cells, and Jess fills Pam in on some of the shenanigans that have been going on here. Pam doesn’t believe Eric is in on the whole vampire religion stuff.

And she’s right. Team Sookie is in the building. Jason keeps watch on the lobby, killing lots of Authority guards. Sookie and Tara go to free Jess and Pam, while Eric and Nora go about disabling the security. Well, they go about that after they stake about a dozen Authority agents from the air. Pretty awesome scene.

Sookie and Tara free Jess and Pam. And Tara and Pam have a very happy reunion.

In the lobby, Jess and Jason’s reunion is nowhere near as warm. She tells him she loves him and he shoots her down. Figuratively! Figuratively!

The gang gets in the elevator—except for Eric and Sookie. They’re going to get Bill. They find him in his chambers, standing over Salome’s gooey remains. Eric tries to convince him that he’s praying to a mad god. And Sookie turns on the waterworks—which usually works on Bill—but he’s too wrapped up in it all. Bill says he thought he was damned for eternity until he found Lilith. Sookie pleads with him to not give up his humanity, and he calls her an abomination. Harsh, Bill.

Bill drinks the vial of Lilith’s blood. And he bleeds out and disintegrates into a puddle of blood. But wait! As Sookie and Eric stare in wonder, the puddle stirs and Bill grows out of the blood, much like Lilith did in their visions. He bares his (gigantic) fangs. “Run!” Eric yells as the credits roll.
Seriously? That’s where it ends?! It’s going to be a long, excruciating, wait until next summer.

Favorite things about this season:  Shaking up the Sookie, Bill, Eric dynamic; Tara and Pam, Steve and Russell, Hoyt leaving, the insane finale

Least favorite things about this season: The werewolves, Jason hooking up with a teacher, the faerie burlesque club, a lot of the vampire Authority stuff, Lafayette’s non-storyline

Well, everyone, it's been a crazy twelve weeks. I absolutely loved recapping every moment of my favorite trashy vampire show. I'll be recapping some other shows in the very near future, so watch out for those. But for now, I'll leave you with a parting shot of my favorite gay chef medium.