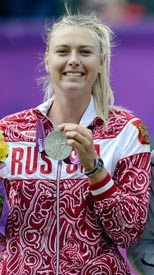 Another Women’s Gold Medal Tennis Match has come and bit the dust. The Olympic Finals are much like the grand slams of professional tennis, except they have so much more national pride….meaning that most of the viewers are actually watching Tennis for a change.


(Take a look at these photos provided by London2012.com . I don’t know who took these, but I am pretty sure they photographed them with a potato.)

Maria Sharapova took Silver This was really beating me up. I frequently state that I am the world’s largest Maria Sharapova fan, not in size…just in the size of my heart! Bam, suck that Williams! Anyway, on a serious note, I was really hoping for Maria to win her first Gold Medal at the Olympics. In the famous words of Will Ferrell “There is nothing wrong with silver,” but fuck that noise, I wanted my Maria to win Gold. Instead, that boring tater salad Serena Williams took gold. That’s the kryptonite of my Olympics.

In other news: hailing from the nation of Belarus, Victoria Azarenka took Bronze. That has to give some hope and glory to the tiny Eastern European nation. As of now Belarus has only 5 medals, and only one gold….so congrats to Victoria for the making some noise for Belarus, and congrats to Maria for gaining silver, and THAT’S IT!

Questions for You:
Seriously, who the fuck took these photos?
Azarenka looks the best.