Since when did this True Blood recap become a halfway house for baby vamps? 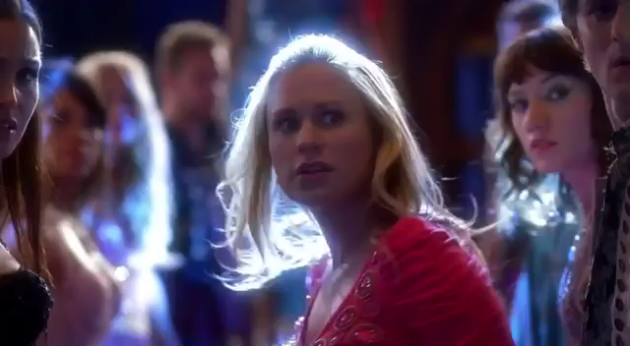 So it’s that time, when True Blood ramps everything up. Or, at least that's what usually happens. The one question on my mind is how they’re going to fit all of the crazy shit they’ve packed into this season into one more episode. In this installment we’ve got more faerie shenanigans, and a bit of werewolf action, but this episode was all about the vampires. Those silly, overacting vampires.

Oh, and hey! We finally got confirmation: his name is spelled Warlow!

Today's chapter breaks are from Stevie Wonder, who provides the ending music.


Heaven Help us All
So, it starts out with Bill hearing some ghostly beckoning. “WooOOOOooo, Billllllll, come toooooo meeeee woooOOOOoooo.” It’s right out of Scooby Doo. But then it soon turns into Pokemon when Bill has a vision of Lilith and she says “I choose you!” He freaks out.

Ain't that Asking for Trouble
Nora wanders the halls, convinces Salome that she’s still with them, gives her a little kiss, and then finds Eric and fucks him. They decide to make a break for it. At least someone on this show is demonstrating some actual sense.

The council meets with General Cavanaugh, and he’s concerned that he can’t get in touch with Roman (sigh...Roman). This guy shows no fear. They have recorded evidence of Steve and Russell murdering all those frat boys. If anyone touches the General, the video goes viral. He also knows they’re behind the Tru Blood factory bombings. Oh, and the military has weapons; they’ve been preparing for this. Eric makes a calculated risk and kills the General. He and Nora offer to hunt down the secretary of state, but it’s really just a ruse to escape.

Can I just say, during this scene I had the realization of how stupid this plot has been. Lilith, Sanguinistas, getting stoned on Lilith’s blood, Lilith covered in afterbirth, Roman and Molly are dead. I could go on, but I digress...

Then they escape by flying! How did I forget that Eric could do that?! It must have been a talent of Godric’s, since Nora can fly as well. I wonder what will happen when Eric finds out what’s become of Pam...

Be Cool, Be Calm (And Keep Yourself Together)
Jessica wants permission to warn Jason and Sookie. But Bill don’t give a fuck. She suggests turning Jason into a vampire, and Bill calls her bluff. He sends her to Bon Temps with a security detail to ensure she comes back with a baby vampire Jason.

She finds Jason, and tries to get him to trust her, but in typical Jason fashion, he’s not picking up on her subtle cues. “Trust me,” she says as she bites him.

Jessica’s security detail starts burying Jess and Jason, when Jason pops up and shoots the Authority agents. Jess tells him that Russell and Steve are gunning for Sookie. She also says that if she had to spend eternity with someone, she’d want it to be Jason. Dawwwwww. Jason leaves to find Sookie.

Jess heads to Fangtasia looking for asylum. Pam and Tara are a tad busy covering up Sheriff Elijah’s murder, but Jessica says the magic word. No, not please. Eric. Pam agrees to hide Jess only if she fills her in on what the fuck has been happening.

After Jess spills the beans, Pam says Eric and Bill are showing nest behavior; essentially when vamps nest they turn into bitches. And drinking Lilith’s blood isn’t helping. Pam goes upstairs to get away from the baby vamps and Jess asks Tara if she likes Pam. Y’know...likes her? Tara is her usually bristly self, but Jess says she just wants to be her BFF. (Tara totally does, by the way.)
Later, Southern vamp lady shows up looking for her progeny, Elijah. She knows he’s dead and confronts Tara about it. But Pam takes the fall for his murder and gets taken away by the Authority. Southern vamp also finds Jessica. Way to stay hidden!

Pam is taken to the holding cells, while Jessica is taken to the council chambers. Bill has just killed Spartacus vamp for having the audacity to say that Lilith has also chosen him as the one. That spooky ghost voice is for him! (Lilith also appears to Salome, but who cares.)

Bill is not pleased with Jessica. He knocks her across the room and says “I am the chosen one!” not at all like a crazy person.

Don't You Worry 'bout a Thing
These two aren’t in this episode all that much. They run around the Authority as mice, and finally find where Emma’s been held captive. She’s in the holding cells with all the...food. Authority agents find Sam and Luna (in human form) and put them in the cells. Sam offer himself up to be Bill’s next meal, leaving Luna to figure out how to get Emma the fuck out of there. If I were Luna, I’d turn into a rhino or an elephant or something.

Nothing's too Good for My Baby

Sheriff Andy checks in on Holly at Merlotte’s, gets an apology from her kids (for posting his ass on the faceybook), and later asks Arlene and Terry for relationship advice. Oh, and Mirella shows up to inform him that she’s pregnant with his baby. And if he reneges on child support, he’s declaring war on the faeries.

I Don't Know Why

Alcide hangs out with his dad, where we find out that Alcide’s dad stole money from his former pack. And then they fight some baby vamps. As to why they feel the need to show us this is beyond me. What more do they have to tell about these two that can’t wait for next season?

Sunshine in Their Eyes

So Sookie hangs out with the faeries, and talks to the Elder Faerie, a dancing, crazy woman with a predilection for asking about music. Sookie asks her about Warlow, and after rambling about how Sookie sluts herself out to anything with fangs, she starts to say something about Warlow, but is interrupted by Jason.

Tangent time: the whole faerie burlesque concept is terrible. When I think of faeries, I think of impossibly beautiful creatures with a shread of fashion sense. All these fae look like they dressed themselves in cast off Peter Pan costumes and dresses from the clearance prom section at Sears. And this Elder? Give me a fucking break! I’m fine with her being crazy, but my god everything else was so lame.
Anyhoo, Jason’s just returned from his encounter with Jessica, and he has bad news: Russell is alive! The Elder is concerned. All the faeries are scared, but Sookie wants to fight. The Elder agrees. They formulate a plan, and Jason acts as bait for Russell and Steve.

Russell finds Jason at the Stackhouse homestead, and glamours him into taking he and Steve to Sookie.
Jason takes them to the field where the faerie club resides. Steve and Russell run around sniffing the air for a bit, then Russell threatens to kill Jason if Sookie doesn’t show herself. She’s ready to fight, but the Elder stops her and decides to fight them herself.

She zaps Steve and—accidentally—Jason, but Russell gets the drop on her and drinks her dry. Consuming all that elder blood lets him see the hidden faerie club, and decides to pay them a visit.
Favorite Moment: I feel like I'm actually more excited for the finale than I was about anything that happened this episode.
Least Favorite Moment: So many things...
OMG Moment: I was just thinking of how awesome the Elder faerie could have been. What if it had been Rupaul?

Or Divine (RIP)?
WHY DO I HAVE ALL THE GOOD IDEAS

See you bitches next week for the season finale!

PS: If you've enjoyed reading my recaps as much as I've enjoyed writing them, share them with your friends, and have those friends tell their friends, and so on until we're more popular than the HuffPo!