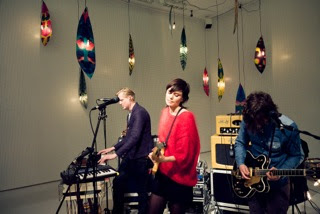 A long time ago, I sent an interview request to Husky Rescue, an awesome Finnish indie pop band. Since then, it's been a lot of back and forth. However, today....they responded! So, now that their new album is nigh, here it is, my interview with Husky Rescue:


UC:  So you guys are touring Asia? How is that been? You just played a show in China, correct?

HR:  On our May tour we played three shows: Beijing, Taipei and Tokyo.
We were very exited to visit Asia, since it's was the first time we had the chance to play there. It was a beautiful experience to travel to China, and bring our music to a vastly different culture. You could see that pop culture scene is starting to bloom, and people want to experience something new. In Taipei the people were even more shy than we are, which was really cute! Tokyo was just as crazy as one might imagine. It was like walking through the set of Fifth Element.We also found our favorite cuisine on this trip, yunnan, the kitchen of southern China.

UC:  You're also releasing a new album. Can we have some details about that?

HR:  First we will be releasing our five track EP, Deep Forest Green on 12th of November through our very own new label El Camino Records. It will be available on our webshop among others. We started the label to release interesting music that we like, and do it in a genuine handcrafted fashion. Currently we are recording new material for our forthcoming album, which will be released in the Spring of 2013. It's still very much in process but we're very excited about it. We're sure it'll take us - and others - to special places.

UC:  You recorded your new album in the Greenpoint area of Brooklyn, correct? Why that location?

HR:  Well first of all the food, again! And the second main reason was a small studio that is owned by Joe McGinty. He has recorded with the likes of Devendra Banhart and Bright Eyes, who are big favorites of ours. Joe also has an AMAZING collection of vintage keyboards and synths, for instance the ARP 2600 (the voice of Star Wars' R2D2), which we recorded extensively for our new songs. Here in Helsinki we have our own studio, but we thought it would be a good idea to try something different. It was just a thrill to be a part of the buzz of the big city. The long walks, blueberry pancakes in the morning, the banks of the East River, so many inspiring things. Right before we had to leave, we had the chance to see Joe accompany karaoke singers live with a piano in the Manhattan Inn in Greenpoint, and it was awesome!

UC:  Any American touring plans for the near future?

HR:  We think that 2013 will bring many good things for us, and we hope to arrange some shows at least in New York and other big cities. We are shaping up the concrete plans now.

UC:  What sort of movies, artwork, photography has been inspiring you guys lately?  (as seeing that's a notable influence on your work)

HR:  We get inspired about many different types of art, but at the moment just the small things in life, the kind that go past us in a blink of an eye. Waking up in the morning, watching the morning dew on a grey rock reflecting sunlight.
In the world of art, The latest thing that struck a chord was a recent Polaroid exhibition. The photos were alright, but mainly it was the colors and especially the random, beautiful edges caused by the chemicals in the Peel-apart Polaroids.

UC:  What's your reception in America, as opposed to Finland, been like?

HR:  t's always thrilling to find that the music we make finds friends all around the world. It never ceases to amaze us to hear people sing our songs at shows, and be a part of that moment with us.