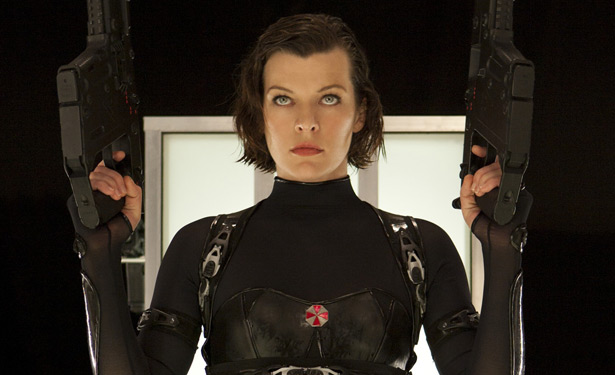 Let me be honest: I am a biased. I love Milla Jovovich. And therefore, I have seen every Resident Evil film. What can one expect from the latest in this illustrious film series? Usually Milla’s character, Alice, running around in tight couture (usually designed by her own fashion haus, Jovovich-Hawk) kicking the shit out of ridiculously menacing zombies. Oh, and there’s usually a rag-tag group of survivors that she tries to help, but things usually don't turn out well for them. Resident Evil: Retribution delivers on all counts. Mild spoilers ahead!

Throughout the series, Alice has gone from unsuspecting agent of the Umbrella Corp--the villainous organization responsible for all the brain-eating and face-munching--to super-powered warrior to normal human again. Regardless, Alice continues to be one of the coolest heroines in recent memory, equal parts steely cool and empathetic.

Retribution picks right up where the last film (Afterlife) ended: shit was blowing up. Alice and crew (Claire and Chris Redfield, conspicuously absent from this installment) had saved the day...or so they thought.

During the fantastic opening sequence, Alice is taken prisoner by Umbrella. She soon makes her escape, clad in tight black leather—and looks damn fine in it, too—and tries to escape the underground Umbrella facility.

This particular base is their testing ground, where they recreate zombie outbreaks in NYC, Tokyo, Moscow and...suburbia? Well, alright.

She has help in the form of Ada Wong (Bingbing Li...or is it Li Bingbing?). Fans will know her from the games, but I knew her as “Infodump Ada.” Her main task in Retribution seems to be stating the obvious and running around in an impractical dress and heels.

I know this is a movie, and that’s what she wears in the game, but come on. At least give the girl some leggings and sensible shoes. Then again, if Alice can destroy legions of zombies in wedge heels, I suppose Ada can wear whatever the hell she wants.

Another character from the games, Leon Kennedy (Johann Urb), makes an appearance, along with a gang of soon-to-be-dead mercenaries, including Luther West (Boris Kodjoe) from Afterlife. And Jill Valentine (Sienna Guillory) is back after being gone for two films.

It does make for a brutal Alice vs Jill fight, though.

Also, Kevin Durand is in it. And I would like him to be in me, if ya know what I mean.


So, the plot? Is that what you really came to read about? Sigh...

They’ve been using clones of Alice and her former allies to recreate those outbreak scenarios. And a little clone girl that Alice gets saddled with for the latter half of the film. As to why we needed a kid to worry about in this film, I’ll never know. Also, Michelle Rodriguez is in it. What can I say? She she gives good bad-ass.


Let’s see, zombies are killed, there's a great car chase, Milla fights zombies with a bike chain (such a great scene), explosions aplenty, and the plot...thickens? No, that’s not right. Gets even more insane? Yes! For me, the crazier the better!

The ending sequence—which is one big WTF moment—only serves as another tease as to what the inevitable 6th movie will bring.

Overall, I enjoyed Resident Evil: Retribution. I don't know if it's the strongest film in the series, but it certainly won't disappoint fans--like me--already invested in Alice's story.