The wonderful world of the world wide web can prove to be a creepy place. As someone who meets her dates online I can tell you this is a fact I have observed first hand. But over the years I have refined my technique and managed to weed out the (majority of) weirdos. "Internet dating” will not be the topic of this rant. Today.
I have a tendency, when it comes to social networking, to "friend" people I don’t necessarily know. If a person sends me a request and we have a number of friends in common I’ll add them no questions asked. In some instances the person and I will have no friends in common but if they are genuinely interesting I'll still add them. After all, it’s social networking and I have a bit of an Ego.

I’m starting to realize this may not be the best approach. In the past few months I have been receiving messages from some of these people. Most of the time it’s a harmless, “how are you” or “I see you like Star Trek,” and as long as the conversation remains harmless I'll continue it. I've been having a Kirk Vs. Picard discussion with a gentleman who lives 4 states away for over a year now. A harmless interaction between two people who share a common interest. Other times things spiral a bit out of control. Here are a few examples of what I mean. 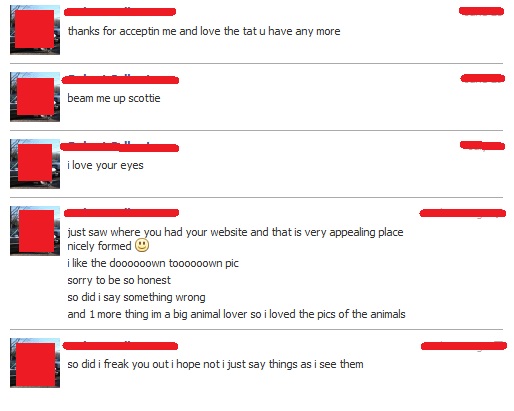 This one I should have known better. Not only have I never met this person but we also lack "friends in common." I noticed this individual had one of his interests listed as Star Trek. Obviously, through some median he had been directed to me since we share that mildly obscure commonality. I "friended" him after taking note that he was married with children. After all, any guy who is married with children wouldn't be looking to be creepy toward young women on the internet. Right? Within a matter of a day I received the first three messages. The final two messages came a day later when I had yet to respond. I can't speak for everyone but personally, I'd have stopped after the first message did not merit a response. I guess that will teach me to have a conversation with a random stranger on the internet. 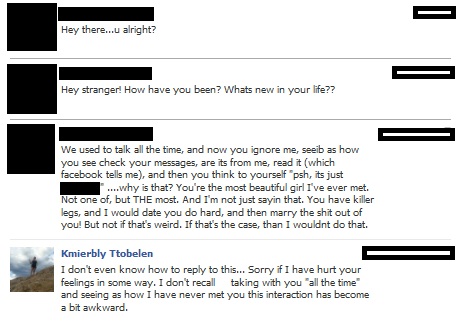 I was speaking to this person on and off for a few months about various things. Shared interests, college (we went to the same University) and mutual friends. I considered these topics harmless banter and made it abundantly clear that I had a boyfriend at the time. For the record our menial conversations were not a daily basis, far from it in fact, as I would chat with this person every two or three weeks when he had access to a computer. Also, as I stated in the conversation itself I HAVE NEVER MET THIS PERSON. Out of the blue, after not responding to a message or two, I get a poorly written creep-o-gram in which I am propositioned for marriage.

O.o
Why does this sh*t happen to me?

These are just two of many examples. There will be more to come. I promise.