Dexter Recap: The Crying on a Treadmill Edition 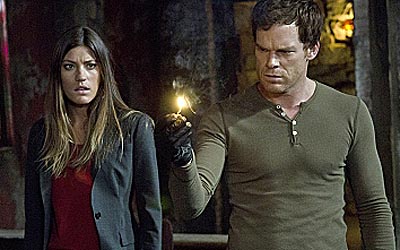 Hello my interweb friends! Did you miss me? I know I’ve barely thought of you. As it should be. Because that would be creepy otherwise.
In all honesty, I’ve hated not having any recap material for you all, and in these past few weeks, there have been so many premiers. But I decided to go with Dexter because we have a history. A long and mostly entertaining history.
So, where to start? Since I’ve already done a series recap, I think I’ll just jump right in. Spoilers to follow!

Picking up not exactly where we left off, our intrepid...hero, Dexter is driving fast in his SUV. He’s low on gas, but when he has to refuel, he discovers his credit cards are declined. Well, shit. But that’s okay, he’ll just take some cash from his bag filled with fake passports and foreign bills. He buys a ticket to Budapest. It would appear Dex is on the run, but if you’ve ever seen this show before, you know things are never that easy.

Now picking up where we actually left off, Debra—Dexter’s adoptive sister and a Lieutenant at Miami Metro—had come to the old church from last season to confess her love for Dexter (yuck), only to find him murdering Colin Hanks.

She’s understandably shocked. Dex tries to go with the “I just snapped” angle, and Deb vacillates between calling Miami Metro and helping Dexter cover up what he’s done. She ultimately goes with the latter and they burn the church down, but not before Dexter forgets one of his signature blood slides in a church grate. Also, some fantastic acting from Jessica Carpenter.

Later, the fire brings the rest of Miami Metro to the scene, and the whole gang’s there. La Guerta, Quinn, Angel, Matsuka, and uhm...new guy from last season. La Guerta is as bitchy as ever, and tells Deb to get outside and meet the press. While everyone is doing their thing, she finds the blood slide and logs it as evidence. (More on that later...) 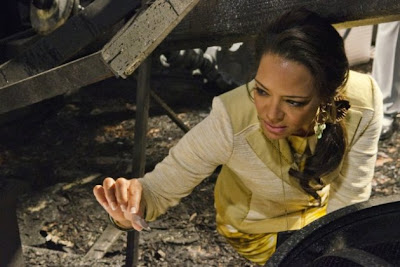 When Dex gets home, he finds creepy intern guy in his side of the apartment. It’s fine, though, intern guy says he was just checking the sports game scores on Dex’s laptop. Sure he was...Anyhoo, Jaime, Dex’s babysitter and intern guy’s girlfriend for some reason, comes in and takes him away.
Back at intern guy’s apartment—which is waaaay too nice for a fucking intern—and he’s canceling all of Dexter’s credit cards. And seriously, did he hack into Dex’s computer? Or does Dex have a folder on his desktop that says “Credit Cards”? You’d think Dexter would keep that stuff well-guarded, what with him being a serial killer and all. Jaime’s too busy doing her nails, or cutting all her shorts into short-shorts, to realize anything that’s going on.

Elsewhere, Detective Mike (aka “new guy from last season”) comes across a stranded motorist. And it’s Victor (Enver Gjokaj) from Dollhouse! Mike offers to help change his flat, but he went and opened the unlocked trunk to find a dead girl. Victor shoots Mike in cold blood. Bye, Mike! It’s Victor’s fault for leaving the trunk open in the first place.

Next morning, Deb talks to Dexter at his apartment, and she’s starting to put things together. Why was Dexter so prepared at the church? Dex shrugs it off as experience from working crime scenes all the time. Deb wants to question him more—but wait—she gets the call that Mike has been shot. Gotta run!

Dex uses this opportunity to grab his “getaway bag” that we saw at the episode’s opening. He doesn’t want to use it, but things aren’t looking good, are they?

At the highway crime scene, Miami Metro finds the dead girl, who’s identified as a Russian stripper (no, really). No witnesses, no fingerprints, either...except for the one Dexter finds! Sometimes I think Miami Metro just doesn’t give a shit sometimes. Did Matsuka really not think to check the turn signal thingamabob (yes, you caught me! I am such a gearhead)? Dex pockets the print so he can find the killer himself.

Back at the police station, Dex puts the fingerprint through the database, while Deb continues to connect the dots of blood to the Ice Truck Killer case. You see, she was kidnapped by Dexter’s bio brother and wrapped in plastic the same way as Colin Hanks. Finding the crime scene photos in evidence only furthers her curiosity. She shows the photos to Dexter, but he acts dumb. After all, he has a plane to catch...

He found out Victor’s real identity is Viktor (well, that will be easy to remember), a Russian mobster. And While everyone else is (Angel and Quinn, specifically) interviewing Russian strippers who conveniently don’t speak English, Dexter’s at Viktor's apartment, and finds out he’s booked a flight to Kiev. And now things are making more sense, aren’t they? Dexter’s not running away, he’s running to catch and kill Viktor. And to think you were worried!

Long story short, Dex drugs and kills Viktor and dumps his body in the ocean. And none shall be the wiser...that is until Viktor’s boss Ray Stevenson catches wind of it. I’m going to guess he’s the season’s big bad, and I couldn’t be happier.

The Miami Metro gang has no new info on the dead stripper case, so Angel and Quinn go drinking and suss out their issues (“You got your drinking problems in my investigation!” “You got your investigation in my drinking problems!” Or somesuch). La Guerta goes poking around about the blood slide; Matsuka reminds her that blood slides were the MO of the Bay Harbor Butcher, aka the deceased Lt Doakes. Well, the framed BHB. La Guerta decides to pocket the slide.
While all this has been going on, Deb has continued to remember things about the night she was almost murdered by the ITK...something about Dexter...Oh, and she has a good cry on her treadmill (because who doesn’t love to cry while exercising?), and then calls Dexter’s place only to have Jaime pick up and confirm what Deb had been wondering.

Having quelled his “Dark Passanger” Dexter returns home, only to find it has been ransacked by Deb. She sits in the middle of the room, Dex’s collection of blood slides and assorted knives and creepy memorabilia on display in front of her.

Well, that was quite the ending, wasn’t it? Now let’s look at some of the stuff I didn’t get to in the main recap.

A Splattering of Information: (LOL get it? Cause Dexter's a blood splatter analyst?)

--The mini flashback scenes were the sloppiest attempt at foreshadowing I’ve seen in a while. But at least James Remar got a paycheck.

--Quinn calling the men in the strip club “perverts’ smacked of hypocrisy.

--Dexter says he should have just killed Colin Hanks instead of disobeying his code and trying to save him last season, to which I reply “Ya fucking think?”

So that’s one recap down, eleven to go. I was impressed by this episode, but then again my expectations were pretty low. This is a new and intriguing twist to the series, though. What did everyone think? Do you like that Deb knows Dex’s dark secret?