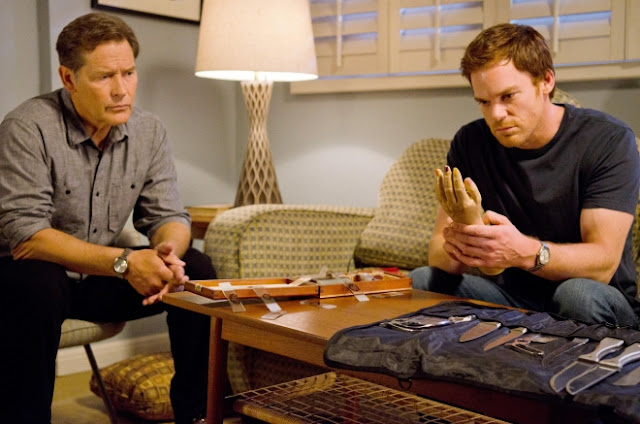 And we’re back! Second episodes are always a little iffy. Depending on the strength of the first episode, it can feel bland by comparison (looking at you, Revolution). And as you’ll recall, the season premiere left us with quite the revelatory cliffhanger. How did it fare? Read on! Spoilers from here on out!


Episode 2: Sunshine and Frosty Swirl
After Dexter confesses his terrible secret—he’s a serial killer—to sister Deb, she runs out of the apartment and throws up in the road. Dexter eventually gets her to come back inside, where he tells her about his “dark passenger.” She doesn’t really buy the whole “I kill people that deserve it” spiel. Instead of arresting Dexter, she punches him and leaves. Dexter’s ghost dad shows up afterward, lamenting the whole sorry situation. Dexter notices the mannequin hand. Shouldn’t that be in the evidence locker?

At Miami Metro, while Deb does some research on the Bay Harbor Butcher (aka Dexter), Dex confronts Matsuka in the evidence locker. All points lead to Lewis (Intern Guy from last week’s recap), who tried to help Matsuka find the hand in the first place. Good thing Dexter doesn't care about reporting the missing hand because...

At the debriefing, Deb tells Angel and Quinn to continue their investigation into Katja’s death. Dexter volunteers to help out with a case involving a prisoner revealing the locations of his victims, but Deb puts Matsuka on it. Because as we soon find out, Deb has decided to play sponsor to Dexter’s dark passenger. Instead of Dex embracing his bad side, Deb wants to help him come clean. Dexter tells her quitting doesn’t work for him, but she’s resolute; he’s coming to live with her.

You know what Angel and Quinn investigating the Fox Hole means? TITTIES. Also, Quinn meets Nadia, a stripper with information on Katja’s death. 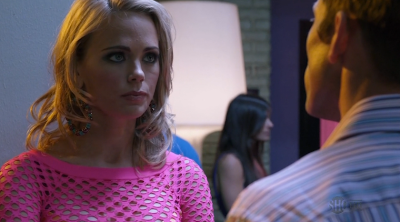 Turns out the dead stripper was seeing a bouncer named Tony. Quinn lays his machismo on thick, but when doesn’t he?

Over at Deb’s Halfway House, she lays down some ground rules, honesty being primary. Can you already tell how much this isn’t going to work? Deb means well, but she’s in over her head, frankly. Ghost dad visits again to dispense some practicality: stop lying to her or it will never work.

At dinner, Deb asks Dexter what his dark passenger feels like. “Oh, just blood trickling down the back of my eyelids,” or something to that effect. Deb takes it all in with a comedic darkness. Later in the evening, Dexter tries to duck out to find Lewis, but Deb’s not having it.

Next morning, Dexter offers to take over Matsuka’s job at the dig site. Deb is fine with it...providing she goes, too. Oh that Deb!

But there’s a problem. Quinn and Angel have brought in Tony for questioning, and does he ever sing like a canary! He gives them a name: Viktor. While Deb susses all that out, Dexter is free to go to the dig site. The convict, Wayne, is pretty much there to offer insights into Dexter’s life.
With time running short, Dexter makes a quick stop at Lewis’ apartment. While strolling through Lewis’ nerd cave, he narrates that toy collecting is a waste of time. Look, I don’t have time to refute this statement, but let’s just say I respectfully disagree. I mean, is it worse than keeping blood slides of all your victims?

Dexter finds Lewis’ laptop on and not security locked. Sloppy, sloppy, Lewis. He’s gonna get into your facebook and make you gay! Not really, but he does find all of Lewis’ youtube rants, including one about Dexter and Lewis’ disgraced former boss, who was most likely framed by intern guy himself.

Lewis gets back, and Dexter scares the shit out of him. He tells him to dump Jaime and quit his job at Miami Metro.
Dexter goes back to the dig site, and Deb is in clingy girlfriend mode. She doesn’t believe he just disappeared for an hour. So while she’s off being a bitch, Dexter gains yet more insights from the convict, who is very zen about acceptance and anger.

Angel and Quinn are back in the Fox Hole, pressing their investigation into Viktor. They come up with nothing, but Fox Hole manager gets a visit from Issac (aka a swarthy, sexy Ray Stevenson), who is also looking for Viktor. He never made his flight, you see. On account of Dexter killing him.
On the dancefloor, Nadia calls up Quinn, wanting to know if she can get a ride home from him ifyaknowwhatimean. And because Quinn thinks with his dick, he agrees. But in a nice twist, Nadia schools him and gets him to pay for her car’s transmission work.

Dexter (and Deb, of course) goes back home to visit his son, Harrison. But wait! What’s this? Jamie and Lewis are still together? This pisses Dexter right the fuck off, seeing as how Lewis seems to not give a shit. Methinks Dexter is seeing red rivulets down the back of his eyes.

What are we having for dinner tonight, Deb? Bloody steaks? Well that’s not coincidental. Dexter asks for some steak sauce, and doses Deb’s steak with just a little horse tranquilizer. He then goes off to kill Lewis, but has second thoughts and calls Deb. They have a moment, and he decides to let Deb help him. After he dumps Lewis’ body on a park bench.

That morning, Issac finds Tony to perform an “exit interview” as if we all don’t know what that means.

Dexter and Deb are back at the dig site (where they still haven’t found any of the convict’s supposed victims), and things are better between them for now. The convict notices their sunny dispositions and waxes poetic on his girl, the “Robin to his Batman” (who fucking wrote this shit dialogue?) who doesn’t talk to him anymore. Also at this point, it is obvious the convict is going to throw himself into traffic. And he does. And it is impressively violent. The episode ends here, with a bit of narration from Dexter about change. This episode ended with more of a whimper, not quite the curse of the second episode, but I can’t help compare it to the premiere. Unfair, I know.


A Splattering of Information:

LaGuerta continued her investigation into the blood slide, but nothing much came of it in this episode.

We all know Deb won’t be able to reform Dexter, right? I’m hoping it backfires brilliantly.

How cool is Ray Stevenson? I think he’s a nice addition to the show.